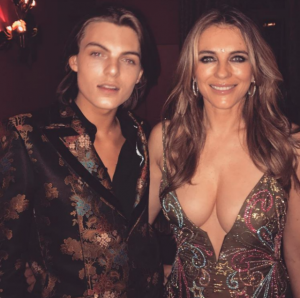 According to Elizabeth Hurley, her son doesn’t mind her sexy photos a�� but her critics still take issue with it.

On Thursday, Damian Hurley turned 16 and the actress took to Instagram to share a photo of them together. a�?Happy Birthday to my little prince  @damianhurley1  . The light of my life for the last 16 years,a�? she wrote in the caption.

In the image, the teenager wears a silk blazer with a floral pattern while his mother is in a plunging dress with colorful crystal embellishment.

Commenters were quick to pass judgement on the 52-year-old’s attire, with one fan even calling her an a�?embarrassing mum.a�? Another added, a�?Using this moment to ‘showcase her assets’ and focus the attention back on her.a�? Someone else called the number a�?a tiny bit inappropriate,a�? with a user adding, a�?Your dress is way too revealing for a sophisticated elegant lady like you.a�?

Others jumped to The Royals star’s defense, with multiple people calling her a�?stunninga�? and a�?beautiful,a�? while one individual wrote, a�?If you’ve got ita�� flaunt it.a�?

And that’s exactly what she does a�� but don’t think that because she shares a lot of bikini pictures that she’s egomaniacal. a�?It’s not just a mad ego trip,a�? Hurley told  Yahoo Lifestyle of her Instagram, which is filled with snapshots from the beach. a�?It’s not just me going nuts on holiday. It’s a business. If I didn’t have my own bikini line, I probably wouldn’t be posting pictures of myself in a bikini.a�?

She’s also a big proponent of body positivity. a�?There has been  such a big movement  in the last few years, which I think is such a positive one. That not everybody has to be 24 and 90 pounds,a�? Hurley explains. a�?People are feeling much more comfortable with their own body shape, with their own body type, and I think that’s a really great thing. At any age, it’s fantastic.a�?