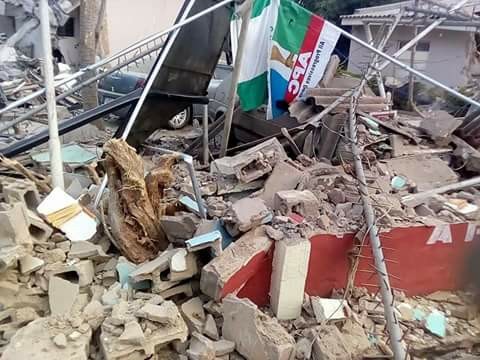 The governor of Kaduna State Malam Nasir Ela��Rufai has gradually transformed his administration to a a�?one-mana�? show and has completely crippled the functional democratic efficiency of the Kaduna state house of assembly thereby carrying out series of anti-democratic vendetta and attacks targeting voices of dissent even as his hatchet men are busy demolishing housing assets of perceived political opponents. Kaduna house of assembly has become a house of infamy with the rash of suspension of Christian law makers from Southern Kaduna who protested the incessant massacre of their people and the forceful dispossession of their ancestral communities by armed Fulani herdsmen who were even reportedly paid by the governor to stop killing Southern Kaduna people but have continued to murder Southern Kaduna elite and villagers simply for opposing the tragic tyrannical styles of selective pilitics being played by Nassir Elrufai a Fulani born politician from Zaria”.

With these words, the leading pro-democracy and non-governmental organization a�� HUMAN RIGHTS WRITERS ASSOCIATION OF NIGERIA (HURIWA) has lambasted the Kaduna state governor, Mallam Nassir Elruffai for demolishing the factional state secretariat of the All Progressives Congress (APC) headed by Senator Suleiman Hunkuyi barely 24hours after he was slammed with a 6- months suspension from APC.

In another development HURIWA has condemned the move by President Muhammadu Buhari to begin a violent clampdown on independent voices in the guise of a draconian declaration made by minister of Information Lai Mohammed that henceforth ‘hate speech’ is now terrorism offence. But HURIWA warned against hiding under the war against hate speech to scuttle free speech. HURIWA said the Executive arm of government has no constitutional powers to create federal offences unless and until the National Assembly specifically creates such as an offence through a very public, transparent and extensively debated procedures at the National Assembly. HURIWA has therefore asked the United Nations to caution President Muhammadu Buhari to desist from launching a violent oppression of opposing voices. “Free speech is the essential soul of constitutional democracy”.

Infact, the pro-democracy body- HUMAN RIGHTS WRITERS ASSOCIATION OF NIGERIA (HURIWA) has called on the Senate President Dr. Bukola Saraki and the Speaker Mr. Dogara Yakubu to invoke the powers vested on the National Assembly by virtue of section 11(4) of the 1999 constitution to take over the law making process of Kaduna state since the apparatus of law making in Kaduna state has collapsed spectacularly due to the heavy dose of dictatorial tendencies of governor Ela��ruffai. HURIWA accused the leadership of the state house of assembly in Kaduna of Mercantilism and trading with the mandate bestowed on them by their constituents by only doing the yeoman’s bidding of Elruffai like typical political zombies.

HURIWA, in a statement by the National Coordinator Comrade Emmanuel Onwubiko and the National Media Affairs Director, Miss Zainab Yusuf, condemned as outrageous, tragic, reprehensible, despicable and primitive the resort to self-help measures by the Kaduna state helmsman Mr. Elruffai through the gross abuse of power to intimidate, harass and violently deprive perceived political opponents of their fundamental right to own moveable and immovable property as guaranteed by the constitution in chapter 4.

HURIWA said the state governor has no such powers of life and death as to personally supervise the illegal destruction of a housing property acquired legitimately by a citizen only because such person has political differences with the governor. The oath of office enshrined in the constitution does not permit him to resort to the use of primitive abuse of power even as the state assembly ought to impeach such a misbehaving governor except that in the case of Kaduna state, the house of assembly may have been purchased by political forces running Kaduna state.

HURIWA said it is only through the takeover of the legislative functions of the moribund and commercialised Kaduna state house of Assembly by the National Assembly that the overwhelming tyrannical and oppressive tendencies of Elruffai can be curtailed.

HURIWA stated that Elruffai’s dictatorship in Kaduna state has been allowed to fester since he demolished the house of the National Vice Chairman of APC Barrister Inuwa Abdulkadir for asking him to settle his political differences with the Kaduna central Senator Shehu Sani.

The Rights group lamented that even the life of Senator Shehu Sani is under intense threats just because Senator Sani criticized governor Elruffaia��s penchant for demolishing habitats of poor Kaduna residents and for anti-peoplesa�� policies of the dictator of Kaduna. “The Senator representing Kaduna central has had his personal aides attacked and attempts are made constantly on their lives and property. One of Shehu Sani’s Advisors was reportedly abducted by armed hoodlums only few weeks back. This anarchy in Kaduna must be reversed now”.

HURIWA recalled that the Kaduna state government in the early hours of Tuesday demolished the factional office of the All Progressive Congress located on Sambo road in the heart of the city.

HURIWA recalled that the office was opened last week by a faction of the party loyal to Senator Suleiman Hunkuyi and other members of the party opposed to governor Nadir El Rufai.

HURIWA quoted the media as reporting that the one story building is owned by Senator Suleiman Hunkuyi even as the demolition was allegedly supervised by heavily armed security personnel made up army and police.”

HURIWA recalled that in a tweet confirming the incidence, senator Hunkuyi wrote: a�?It is on record that few months back, @GovKaduna Mallam @elrufai marked another property of mine in Hunkuyi town for demolition but residents of the area prevented the officials from demolishing it. Today, he came well prepared with military men to destroy my house at Sambo Roada�?.

9 thoughts on “Ela��Rufaia��s Demolition of APC house: HURIWA wants NASS to step in:”