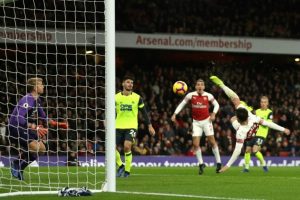 Unai Emery praised the increasingly influential Lucas Torreira after the Uruguayan midfielder’s late goal secured a 1-0 win for  hungry Arsenal side against a resolute Huddersfield on Saturday.

The Gunners stretched their unbeaten run to 21 games but had looked set to drop two points at the Emirates Stadium before Torreira’s spectacular overhead kick seven minutes from time.

The 22-year-old has largely been viewed as a defensive guard for Arsenal’s back four, yet two goals in the past week justifies Emery’s faith that he can be effective at both ends of the pitch.

Emery said: “He has the quality and he has a very quick interpretation of the pitch in a tactical sense, both offensively and defensively. He is very fast in his mind and his feet.

“He is improving and is very committed every day to improve and to learn English. And he is hungry.”

The lead-up to the game was dominated by the headlines which exposed four Arsenal players for allegedly indulging in nitrous oxide inhalation on a night out.

Emery though refused to comment further on the matter.

“We cannot speak about this outside the club. I don’t want any distractions. The players needed to have their focus on the match today,” he said.

The Spaniard intimated he may not tolerate his players overstepping the mark on the pitch either, as Granit Xhaka, Shkodran Mustafi and Matteo Guendouzi were all booked for diving against Huddersfield.

Emery’s censure of his players was of the lip-service variety. Indeed, he mostly addressed the issue by focusing on the robustness of Huddersfield’s approach.

Emery said: “I don’t want simulation from our players. I want more rhythm in the match. But Huddersfield stopped that rhythm a lot. The opposition can decide what rhythm they want to play at and it was a tough match for that. For me the yellow cards were good decisions by the referee.”

– Injuries, bookings mounting –
It appears that the dawn of a new age at the Emirates is bringing with it a mentality to win no matter what the cost is to Arsenal’s name.

Emery added: “It was a very important result for us. There were a lot of yellow cards, a lot of stoppages and a lot of time lost. We needed patience and we needed the win.

“We found a victory today. The injuries and yellow cards are coming with the number of matches we have had. I don’t know how we are going to play in midweek but I do know that I have enough players to cope.

“Everyone will have two days off now before we come in again ahead of the Europa League game this week.”

While Arsenal’s victory maintained their pursuit of a top four finish for the first time in three seasons, defeat for Huddersfield meant that David Wagner’s side dropped back into the bottom three.

Wagner refused to be downhearted, however. The German can sense that his players are becoming harder to beat by the Premier League elite.

Wagner said: “If you concede so late in a game and because of the defensive shift and effort, as well as the tactical quality the players have shown, how we limited Arsenal’s offensive power and strength, how we kept them away from our goal, this is enough if you are Huddersfield Town to deserve a point.

“Unfortunately, we haven’t got one, but we can keep our head held high after this performance against a top-class side.

“We wanted to make it uncomfortable for Arsenal. We had a couple of half-chances where we should have done better and we can keep looking forward after this performance.”

Neymar to PSG: how money and Messi led to the sale of the century

'Nigeria have lot of work to do before World Cup', Gernot Rohr says after England loss