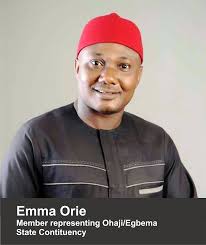 Nnamdi sank lower in the rickety chair of his study room. He crossed one of his legs over the other and surveyed his dusty black coloured shoes. a�?Papa!a�� Angela called and Nnamdi glanced in her direction, aware that she and a younger girl with very black hair were moving towards his study room. Angela was all he had to show for six years of marriage that had ended seven years ago in a divorce. a�?Yes?a�� he asked through his teeth. a�?Pa Okoro has slumped. Papa! Come quickly!a�? She said. Nnamdi hurried to Okoroa��s house. So many persons ran to his house too. Someone accompanied a Trado-medical doctor to the house. The doctor rubbed him with a liquid substance, pricked him with needles and pinched hard but still, Okoro did not move. He was dead. He was a retired Imo State Civil Servant, 75 years old, with a thick, fiery beard and bushy eyebrows. He was broad framed with unkempt hairs and narrow eyes. The government of Rochas Okorocha denied him his pension for years. Some say the government owed him 89 months pension. This is wickedness in high places. The worst kind of poverty is when someone cannot get food and therefore is thin and weak.

During Pa Okoroa��s burial, Emmanuel Orie, the member representing Ohaji/Egbema at the Imo State House of Assembly made a pledge to assist the bereaved family financially. He has since reneged on his promise and has stopped picking calls of the family. This to me is very bad. Leaders depend on the trust and loyalty of their followers. Why would a leader lie to his follower, when he should understand the negative consequences of being caught in that lie? Orie lied to Pa Okoroa��s family and never redeemed his pledge. He forgot the biblical quotation which says: A generous man will prosper, he who refreshes others will himself be refreshed (Proverb 11:25-28). He forgot the Chinese philosophical saying which goes thus: a�?He who obtains has a little, he who scatters has mucha��a��.

I remember when Orie saw Johnson, one of his followers from Obeakpu- Egbema, at a burial and invited him to Owerri saying he had something for him. On getting to Owerri, he instructed his Aide to tell him that he was not around. The young man, before embarking on the journey had called him that he was coming and he gave the nod to proceed only for him to stopped picking his calls. He did similar thing to me. He has done it to several persons. The House of Assembly member seems to be fond of making promises he never adheres to. He seems not to be a man of his words.

From a moral point of view, whata��s wrong with deception is that it is a betrayal of trust. Trust is impossible without truth, and without trust, you may have a senior title but you are not a leader. Stop sparing feelings and be a leader that values and respects people enough to be a model for leading from the truth. You cannot deceive someone unless they trust you, believing that youa��re being truthful with them. When you succeed in deceiving them, you exploit that trust, using that person for your own ends. In every domain of life, such betrayals weaken or destroy the trust relationships essential to our vital institutions. The health of a democracy depends in part on the ability of its leaders to muster popular support for their policies, and that requires widespread trust in those leaders. In fact, the trust of constituents is one of a political leadera��s most valuable assets. But lying to your supporters squanders that trust and diminishes your capacity to lead.

Permit me to make an unambiguous fact here. I am not going to discuss the sanctimonious or avaricious tenure of Emmanuel Orie at the Imo State House of Assembly. I hope you are not disappointed. You may be saddened or happy, but I am not surprised of the manifest successes, failures, tactics, wisdom, folly and blunders of the Oriea��s administration. I am less concerned about the general excuses or indexes that are often used by Orie’s supporters and opponents to praise or castigate his activities at the Imo House. Whether he did well as a lawmaker or not, is not my concern for now. This should be reserved for history. My concern is that he should learn to keep to promises. Lying to his supporters squanders that trust and diminishes his capacity to lead. As citizens, we have a responsibility. We have to impress upon those who lead us that we do care about truth and honesty and that losing our trust is an unacceptable cost of deceptive politics. See you next week as I talk about the a�?ndi agburu haa�� brouhaha in Imo State.

A nation that has been swallowed

24 thoughts on “Emma Orie: How Not To Be A Political Leader”