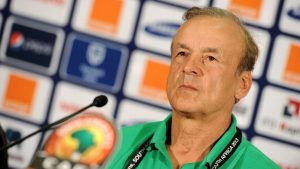 Gernot Rohr has confirmed that he will play his ‘best team’ in Saturday’s friendly against England at Wembley.

Rohr told reporters on Friday that he will pick his preferred starters for the World Cup warm-up match, with one or two exceptions.

“Perhaps there will be one or two players who are not in the best team because of injury,” Rohr continued, “but tomorrow we will see the team which has a chance to start against Croatia.”

Those two absentees are likely to be Wilfred Ndidi and Moses Simon.

Ndidi appears to have recovered fully and trained with the rest of the squad at Wembley on Friday, but will not be risked, according to team officials.

play
1:28
Kwese Sports and John Obi Mikel spoke about their excitement together as the Nigeria captain and former Chelsea midfielder announced their new partnership.

A combination of injuries, fitness issues, suspensions and a need to try out new players meant that the coach has been unable to roll out his starting eleven since last October.

However, with almost every player now fully fit and available for selection, the German now has a chance to see his first team in action against formidable opposition.

Rohr also confirmed that Simon is out of the World Cup after a third scan in London showed the extent of his hip problem.

“Unfortunately, the result of the scan showed that he will be out for three to four weeks, so he cannot go to the World Cup,” Rohr added.

Two players will be dropped after Saturday’s match but Rohr insisted that they will not be sent home, but will be on standby with the rest of the squad.

“There was a situation at the last World Cup where a player was in the team and then at the last minute, had an injury,” the coach explained. “So nobody will go home.

“They will be with us on standby.”
Nigeria will leave for Austria on Sunday for the final phase of their pre-World Cup training camp ahead of group matches against Croatia, Iceland and Argentina.

Why Romelu Lukaku is untouchable in my team: Mourinho