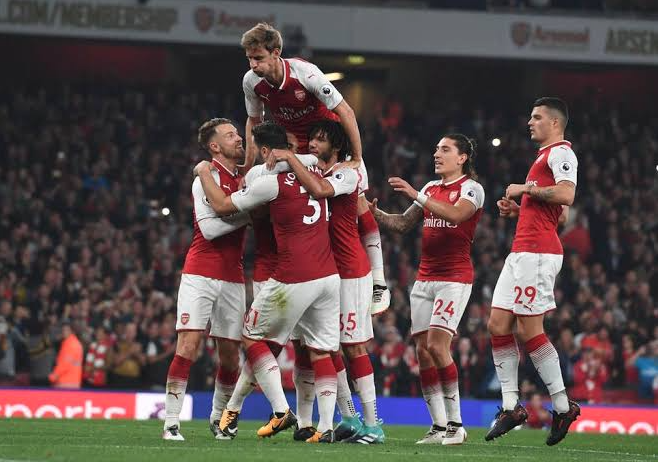 Hector Bellerin scored a late equaliser to rescue 10-man Arsenal from defeat against Chelsea at Stamford Bridge as the match ended 2-2.

David Luiz was sent off for a foul on Tammy Abraham, who was clean through on goal, the referee awarded a penalty to Chelsea, Jorginho converted from the spot to give Chelsea the a 1-0 lead in the 27th minutes.

The numerical disadvantage rattled Arsenal initially but the gradually found their rhythm after Chelsea fail to convert their dominance into goals.

The first half ended 1-0 in favor of Chelsea but it could been more if they had not allowed complacency to set it after David Luiz was sent off.

Gabriel Martinelli restored parity for Arsenal with a brilliant finish after Ngolo Kante slip in the build up to the goal to allow the Brazilian a clear sight at goal, he made no mistake by slotting under Kepa.

The goal renewed Arsenal’s confidence with a man down, they started causing problems for Chelsea, but the hosts soon take the lead when Azpilicueta scored from an inviting cross by Calum Hudson Odoi.

Two minutes later Arsenal fought their back into the match courtesy of Hector Bellerin’s low drive to snatch a point with a man down.

Everton surrendered a 2-0 lead against Newcastle at Goodison Park.

Moise Kean scored his first premier league goal since joining from Juventus in the summer.

Calvert Lewin increased the lead just after the restart, Newcastle crawled their way back to snatch a point with two late goals in the 94th and 95th minute to share the spoils.

Sergio Aguero came off the bench to score the winning goal for Manchester City against Sheffield United after Gabriel Jesus had lost a first half penalty.

The Argentine made no mistake converting De Bruyne’s cross from six yards to give City a 1-0 victory.

Aston Villa scored a last-minute winner to grab the maximum points against Watford after going behind in the first half, Douglas Luis and Tyron Mings goals canceled out Troy Denney’s opener for Watford to give the hosts a 2-1 win.

Bournemouth halted their winless run in the premier league with a vital 3-1 victory over Brighton courtesy of a brace from Calum Wilson and a Pascal Gross’ own goal, Mooy scored a consolation for Brighton in the closing moments.

Southampton recorded a 2-0 away victory over Crystal Palace thanks to goals from Nathan Redmond and Stuart Armstrong.

Leicester City are in action against West Ham tonight, while Tottenham welcome Norwich to White Hart Lane and Burnley have a date with Manchester United at Old Trafford.

23 thoughts on “EPL: Bellerin Rescues Arsenal From Defeat Against Chelsea ”