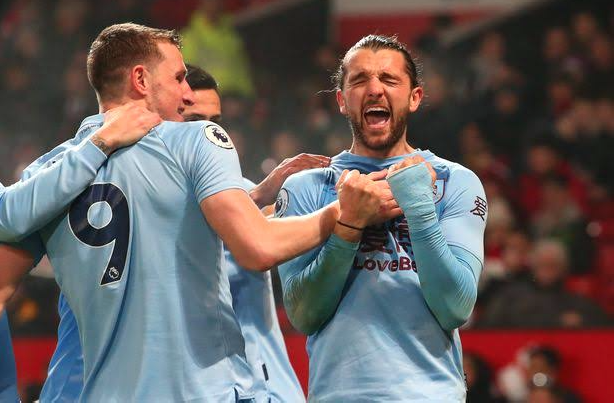 Burnley recorded a stunning 2-0 victory over Manchester United at Old Trafford courtesy of goals from Chris Wood and and Jay Rodriguez.

Wood opened the scoring with a close range finish just before half time.

Jay Rodriguez doubled the lead for Watford when he finished off a one-two with Wood beating Deb Gea with a fierce strike to hand the visitors the maximum points.

Manchester United were jeered by their supporters after another abject performance.

“There are loads of thoughts going through my mind.

At one point it felt like we were creating openings and didn’t take them. Now, it’s one of disappointment. We hold our hands up, it is not good enough.

“The players are giving everything, they have done absolutely fantastic so far this season but they know it wasn’t good enough tonight.

“The boys they looked mentally tired towards the end, we didn’t find that creativity. We can’t feel sorry for ourselves. When you are at Man Utd you are privileged because you are playing for the best club in the world.

Solskjaer lamented
Wilfred Ndidi made a return to Leicester City in the 4-1 victory over West Ham.

The Super Eagles star sustained a knee injury last month but he recovered ahead of schedule to play a key role in the match.

Ayoze Perez scored a brace, while Ricardo Perrera and Harvey Barnes added the other goals to give the hosts the maximum points.

Heung Min Son scored the winning goal for Tottenham in the 2-1 victory over Norwich to earn their first premier league win in 2020.