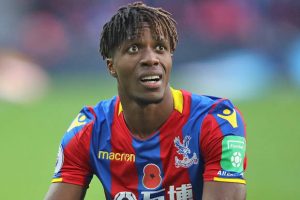 It was Zaha’s first-ever Premier League double.
An astonishing first half delivered five goals in the opening 34 minutes with Zaha, twice, and James Tompkins making a mockery of Palace’s recent league form.

The London side had brought just one win in 10 league games and three successive home defeats.

But Brighton, who before this game had scored only seven away goals all season, responded with a close-range effort from Glenn Murray and a sublime finish from Jose Izquierdo.

The second half was never going to top that as Palace guarded their lead against fierce Brighton pressure, with Murray twice going close against his former club.

Elsewhere, a superb display by a Swansea side seeking their fifth home win in a row was blighted by a Kyle Naughton own goal as visitors Everton held them to a 1-1 draw at the Liberty Stadium.

Despite the dominance of the home side, keeper Lukasz Fabianski had to make two superb reflex saves in quick succession to thwart Everton.

Unfortunately for him, the second bounced off the head of Naughton and back towards the goal and though Alfie Mawson cleared the ball it was deemed to have crossed the line.

Jordan Ayew put Swansea level after a sustained period of pressure in the second half, controlling the ball on his chest before hammering it home.

The Ghanaian was returning from a three-match ban he received for a straight red card against Huddersfield.

Despite Swansea enjoying the lion’s share of possession, Seamus Coleman came closest to securing all three points for his side, the Everton full back slamming a shot off the crossbar 15 minutes from the end. (Reuters/NAN)

Little errors that ruined chances of African teams in Russia 2018