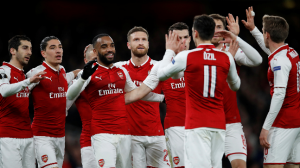 Arsenal took a big step towards reaching the Europa League semi-finals after a 4-1 rout of CSKA Moscow and Atletico Madrid did the same with a 2-0 home win over Sporting Lisbon on Thursday.

Lazio also stayed on course to progress after an action-packed 4-2 home win over Salzburg in their quarter-final first leg and upstarts RB Leipzig will head to Olympique de Marseille with a 1-0 advantage.

Wales midfielder Aaron Ramsey and France striker Alexandre Lacazette scored two goals each in a blistering first half for Arsenal, cancelling out a superb free kick by CSKA’s Aleksandr Golovin at the Emirates stadium.

Ramsey, who had a goal disallowed early on, hit the woodwork in the second half and CSKA keeper Igor Akinfeev made several saves to spare the visitors from a heavier defeat.

Atletico, Europa League winners in 2012, extended their winning home streak in all competitions to nine games after Koke scored inside the opening 30 seconds and Antoine Griezmann added the second shortly before half-time.

Lazio ended Salzburg’s 35-game unbeaten run stretching back to August after the visiting Austrian side twice drew level but were undone by quickfire late goals from Felipe Anderson and Ciro Immobile.

Germany’s Leipzig, playing in European competition for the first time, put themselves in a good position to progress after a Timo Werner goal on the stroke of halftime sank Marseille. (Reuters/NAN)