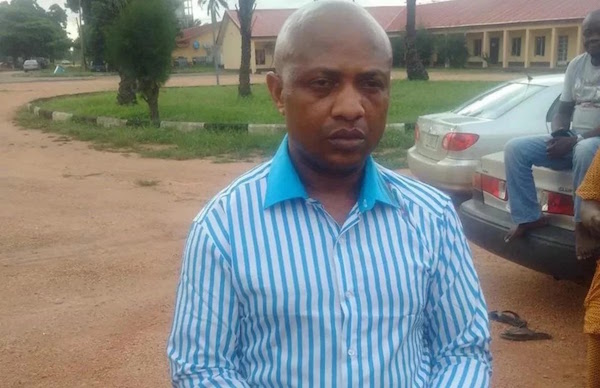 The Nigerian police on Saturday said that the arrested kidnap kingpin, Chukwudumeme George Onwuamadike, alias Evans, is still in their custody and has not vanished.

The spokesman of  Police  Jimoh Moshood, a Chief Superintendent of Police (CPS),  said Evans  was safe and still under police watch.

Moshood was denying a sensational story published today by a Nigerian newspaper that Evans had vanished in police cell and is incommunicado.

In a statement, Moshood said: “Evans is intact in Police Custody. Investigation into all the crimes he has committed which include several kidnappings; armed robbery and murder are ongoing. The Police have made significant progress in the investigations of these crimes.

“The public should disregard and discountenance all media reports in the social and print media that he has vanished or released and all criminal charges against him dropped as UNTRUE and ABSOLUTE FALSEHOOD.

“Evans is in Police custody and would be arraigned in court along with other members of his gang on completion of investigation.

Earlier in an interview with TheNation, Moshood  urged Nigerians to not fret over the reported “vanishing” of suspected kidnap kingpin.

Moshood said investigation was still ongoing, adding that the suspect would be charged to court as soon as all ends were tied.

“The media need to avoid stories that could create fear, tension or misrepresentation among the masses. Where did Evans vanish to? That headline was misleading. The suspect and his accomplices are very much in our custody.

“We are working hard to ensure that justice is served at the end of the day. There are certain information that are not for public consumption to avoid jeopardising investigation or even national security.

“Evans is with the police. His whereabouts is known but cannot be made public. We are appealing to Nigerians to remain calm and support the police to conclude its investigation.”

14 thoughts on “Evans safe in our custody – Police spokesman”