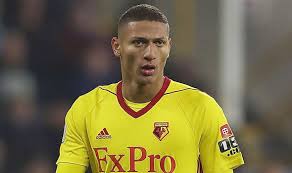 Everton have signed Brazilian forward Richarlison from fellow Premier League outfit Watford after manager Marco Silva returned to his old club for his first purchase of the transfer window.The financial terms were not disclosed but British media said Everton paid about 40 million pounds ($52.56 million) for the 21-year-old who has penned a five-year contract.

“I think it is going to be important for me here to be with Marco Silva again,” Richarlison told evertontv. “…I am still learning as a player and I aim to develop and grow here.”

Silva had signed Richarlison from Fluminense in August last year when he was in charge at Vicarage Road after the player impressed for Brazil at the Under-20 World Cup.

“I developed really well with him (Silva) while he was with me at Watford… and one day I believe he can help me to be selected for Brazil in the full national team.

“But that is for the future and my present is here with Everton. I want my dreams to become a reality here at one of the biggest clubs in England.”

Richarlison scored five goals for Watford in his first 12 league matches but has not found the net since November.

He becomes Everton’s first signing since Portuguese coach Silva succeeded the sacked Sam Allardyce in May.

“He is a good player who will make our team and our squad more competitive,” said Silva who is reshaping his squad after the departure of Wayne Rooney to the MLS.

“The competition between our players is really important to me. This is what will make us better as a club, always that competition within the squad.

“The player himself is fast, strong, very good technically and he can play in three positions across the front line. He can also score goals.”

Richarlison started out at America Mineiro as a 17-year-old in December 2014 before joining four-times Brazilian champions Fluminense 12 months later, scoring 19 goals in 67 matches.

The club’s most expensive player is Gylfi Sigurdsson who cost 45 million pounds from Swansea City almost a year ago.

Uzoho, Ndidi to start for Nigeria against Czech Republic