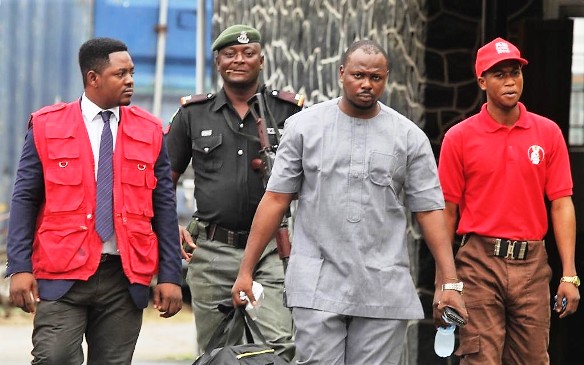 sa Ayi, on or about 13th day of January, 2014, being an employee of Coronation Merchant Bank, in Lagos within the Lagos Judicial Division with intent to defraud, falsified account No. 2990001176 belonging to Ogunjemiyo E. Mascot in possession of your employer by debiting the said account to the tune of N4, 277, 000.00, using an instruction which you purported to have been issued by Ogunjemiyo E. Mascot.a�?

When the 11-count charge was read to him, he pleaded not guilty, thereby setting the stage for his full trial.

Counsel to the defendant, Robert Clarke, SAN, had pleaded with the court to grant the defendant bail on the grounds that he needed to take his son abroad for surgery.

However, the prosecution had opposed the bail application, saying that a�?he is a flight-risk who had plans to relocate with his entire family to the United States of America last year, if not for the timely response in arresting him by the EFCC.a�?

The prosecution had further said that there was no document showing that the defendanta��s son was critically ill to warrant him being flown abroad for treatment.

The judge, while denying him bail, had said that if the defendant’s son was truly ill and needed medical treatment abroad, he should not be pleading with the court to allow him travel out with his entire family only to treat his son.

The judge had, therefore, remanded the defendant in Kirikiri Prisons, Lagos .

During the proceedings on March 6, 2018, the defendant had changed his plea from ‘not guilty’ to ‘guilty’.

In view of this, the prosecution had reviewed the facts of the case and tendered documents that were admitted in evidence.

The judge subsequently convicted Ayi on all the charges and deferred sentencing to today.

Delivering her judgment today, the judge sentenced him to seven years imprisonment on each count of the charge.

The sentences are to run concurrently from the day of arrest.

The Judge further held that all properties traced to the defendant be confiscated till it amounts to the sum of N700million and should be restituted to the plaintiff, Coronation Merchant Bank.