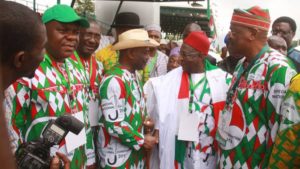 The Peoples Democratic Party has adopted a former member of the House of Representatives, Alhaji Bello Matawallen-Maradun as its governorship candidate in Zamfara.

The News Agency of Nigeria reports that the candidate emerged through consensus after stakeholders of the party unanimously adopted him at a meeting in Gusau on Sunday.

The other aspirant, Senator Sahabi Ya'u was allegedly made to step down by party elders.

A chieftain of the PDP, Gen. Aliyu Gusau, who presented the candidate to party members, said: “We are happy our party is having only two aspirants for governorship position in the state, unlike the other party that has about 10 governorship aspirants.

“But now due to the consensus following the intervention of elders all of us agree that one of the candidates will contest for the seat.”

He described the development as a good step towards the victory of the party in the 2019 general elections.

Gusau urged members of the party to remain united and work together to ensure victory.

According to him, the state has suffered a lot in the hands of selfish politicians and its time to cooperate and work together to rescue the state.

“We must make sure that we vote for competent and deserved candidates in all elective positions”, he said.

In his remarks, Ya'u, said he stepped down following the intervention of the party elders in the state led by Gusau.

” As a loyal member of our great party, I am ready to listen to party elders and work for the progress of the party,” he added.

The state PDP Chairman, Alhaji Hassan Nasiha thanked Ya'u for his sacrifice and the elders for working to ensure peace and unity in the party

Responding, the PDP governorship candidate, thanked Ya” u, party leaders, elders and entire members of the PDP in the state for their support and promised to deliver the state to the party in 2019.

“God willing, if we are voted into power, we are going to give priority to addressing the security problems affecting our communities, employment creation, poverty reduction and education sector”, he said.

Osinbajo is sucked in propaganda, deception, impunity and sleazes: PDP