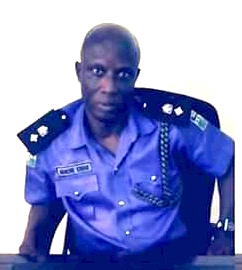 Bomadi which used to be a flashpoint for unscrupulous elements have turned to a no go area for criminals especially kidnappers, cultists and rapists who used to have a free day without interruption.

The activities of these men of the underworld were halted by a competent police officer who knows his onion in his chosen career.

In this exclusive interview with The Nigerian Voice, the Divisional Police Officer (DPO), in charge of the Bomadi Divisional Headquarter, CSP Paul Enihe, revealed that on assumption of Office, he did skeletal posting, work in synergy with sister security agencies especially the military, the executives of Bomadi community and activated the local vigilante.

Barely five months of taking over the mantle of leadership on 27th March 2019, the DPO chased hoodlums out of Bomadi with his night patrol routine which has brought calmness to the once troubled zone.

“When I entered into Bomadi, what I inherited was cult boys and some few cases of rape. So, immediately I took over the mantle of leadership when I was posted here on the 27th of March, I have to reorganize my office by doing some skeletal posting, then I started getting results by arresting most of these cult boys and these boys that normally indulge themselves in rape.

CSP Enihe continued: “As I am talking between March and now, I have sent 13 of them to prison in Warri. So, that is what made the area to look calm, the Bomadi environ is so calm, there is no problem”.

Hear him: “All my men are trying their possible best to make sure that there is peace in conjunction with the vigilante. The vigilante are contributing seriously. Since I took over the mantle of leadership, I have not recorded any case of kidnapping because I work in synergy with the military, community executives and vigilante”.

He noted that the hooligans began to relocate as soon as security was beefed up in the area, “In the night, we always go out on serious patrol to make sure we get all these boys arrested. So, immediately they noticed us, they have to go out of Bomadi”.

He said the free movement of people around and peace being enjoyed is the outcome of curbing and subsequent arrest carried out by his men under his supervision.

“You see people moving freely and if they tell you that this place belongs to the Niger Delta region you will not believe because of the way we patrol and monitor the area”, he stressed.

Also, he ascribed his five months success to the Commissioner of Police in the state, Mr. Adeyinka Adeleke, whom he said deploys capable hands to manage crises ridden area, “my Commissoner of police likes posting somebody who is competent to a place. Someone who is fit to manage the situation. Most of the senior officers are well trained and groomed. The senior ones, when we are given the opportunity to manage crises, we know what to do”

Corroborating the position of the DPO, the Secretary-General of Bomadi Community, Comrade Alade Dennis, said insecurity in Bomadi is now a thing of the past.

He said there has been a lot of misconception about the Community, “we are peace and project loving people. There is nothing negative about Bomadi Community like what people will say, coupled with the fact that we have a hard working DPO”, the Secretary-General said.