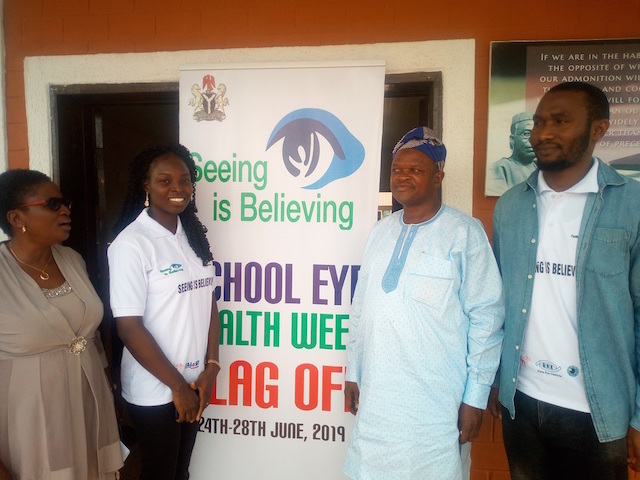 At least 120,000 pupils in schools across Osun State have been screened for eye defects and additional 40,000 are undergoing eye screening in the School Eye Health Week.

The screening was conducted by a nonprofit organization, Community Advancement for Self Reliance (CAI4SR) with the support of its donor partner, ChristoffelBlinden Mission (CBM UK) under the flagship programme of Standard Chartered Bank, Seeing is Believing (SiB).

Kolawole noted that the essence of the screening was to ensure early detection of eye defects and other challenges that could affect the vision of the pupils and cause them eye strain.

He noted that pupils with good vision would be able to learn, become educated and achieve their full potentials in life.

He commended CAI4SR and SIB for the gesture and assured them of the full support of the state government and SUBEB.

Teachers in the state were also trained on ways to detect eye problems in pupils as a sustainability strategy after the programme.

The PS appealed to the parents and guardians and all stakeholders in the education sector in the state to have full confidence in the program.

The CBM’s Cluster Coordinator for the project, Mr Clement Obayi lauded the state government for providing an enabling environment for the exercise.

He explained that the exercise was aimed at preventing avoidable blindness among school pupils, saying that early detection is crucial to achieving necessary corrections.

The Programme Officer of CAI4SR, Mrs Akintunde Oluwatoyin presented some children who were at the verge of becoming blind when their cases were detected and presented.

A 6-year-old boy, Sesan and a 15-year-old girl, Miss Mariam Mudasiru whose eyes were operated at the University College Hospital, Ibadan under the sponsorships of SIB programme expressed gratitude to the donors.

Dstv And Its Demonic Plan To Kill Tstv: Nigerians, This New Baby Must Not Die