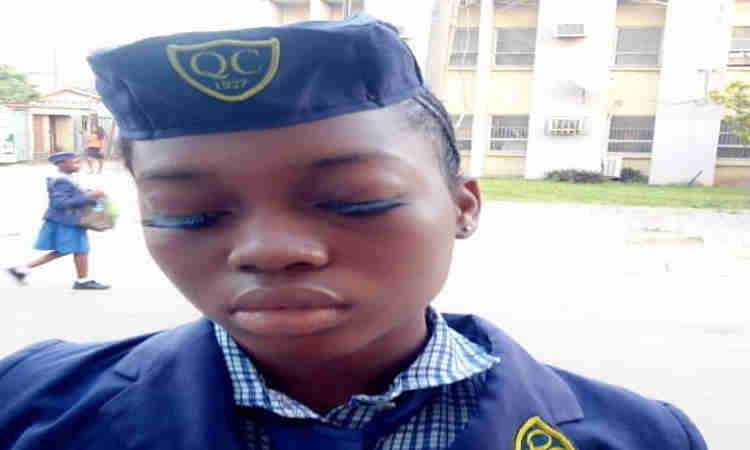 I have been reading with keen interests arguments raised for and against the event that occurred at Queen’s College girl yesterday, and, I must state that those that launched the bastardisation of the Nigerian education sector some decades ago really had a mission for doing so. It is so shameful that our institutions of learning has been turned to some sort of moral gymnasium, a perfect reflection of the decrepit nature of our societies where which serious mental scrutiny through logic has given way to laxity mediocrity

Going by several opinions pushed out so far, the message being passed across indicates shows that women are still seen as sexual object and are expected to mold sampling their public self-image through a sexualised appearance because their attrativeness is increasingly equated with sexiness by paedophiles in the society that mask themselves as moral thermometers.

A close look at the dressing of the Queen’s College girl would convince who believes in peoples’ freedom and right to self-determination that, as an extension of her freedom of expression, there is absolutely nothing wrong in the eyelashes she was putting on. But, it is so pathetic that we are in a country where rape and sexual harassment is justified based on what a women chooses to put on her body. The experts at N Style specialize in lash extensions, meaning it’s all that they do, like the Drybar of lash extensions. An industry favorite, they offer 300 different types of eyelashes customizable to your personal style in natural mink and silk.

We have witnessed instances where women are expected to monitor their looks and modify their outfits depending on what is required in a given setting just to satisfy the moral compass a segment of the society, and, this was again at play in the Queen’s College scenario where the innocent girl was not just shamed but also humiliated for wearing eyelashes. It is embarrassing that despite the fact that the Constitution provides for right to dignity of persons (with no emphasis on gender or age), the innocent girl was subjected to inhuman treatment by the authority of the school.

Without being hypocritical, the response of the school authority to the girl’s dressing is most unfortunate, condemnable and constitute an assault on her person. Without mincing words, individuals have control over what they wear, but, it is most disheartening that the innocent girl has been a victim of negative evaluations even from women who should have ordinarily stand to defend the innocent girl that was humiliated basically because of what she was wearing to the extent that she was even being slut-shamed by women.

I remember that “education is light” used to be a favourite motto of many schools in my early years while growing up in Ibadan. This motto was clearly used by many in those days to the present without giving thought to perspectives, shades and colours of light the so-called education brings forth. Critical questions such as the kind of light (education) we are shining forth (imparting) need be aksed considering the fact that candle light and the light bulb cannot be compared in terms of brightness.

Nigerian secondary and tertiary education has so sank over the years that its worthless value shines forth so much that it blinds us of our degree of ignorance and quantum of darkness that envelopes us to the extent that standards have gone to the dogs and quality to the gutters.

As far as Nigerian education education is concerned, charlatans whose sole aim is to make profits have taken the drivers’ seat while professionals have become waste in the physics of the current sorry situation we are as a people. While the charlatans look chubby in their SUVs, the professionals look worn out with grey hair and worn out shoes. This sorry State we are as a people reflects in how students are being treated with disdain in our institutions of learning.

It is therefore high time government paid adequate attention to education by providing realistic, effective and implementable policies to revive our educational sector from the present unfavourable and unfortunate development. Our political administrators needs to abstain from introducing unfavorable policies that could lead to the downfall of the system just for the standardization of their selfish private established schools.

Tinubu: A Judge At His Own CaseA�

3,787 thoughts on “Eyelashes and Sexual Advances: The Dis-Education of a Nigerian Hypocrite”