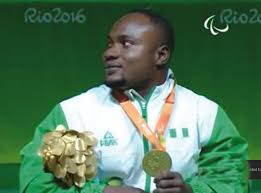 Ezuruike who participated in the men’s Para Powerlifting Lightweight event in the early hours of Tuesday.

He successfully lifted 188kg and 194kg respectively by garnering 224.3 points to win the Gold medal.

Esther Onyema retained the Gold medal she won at the 2014 edition of the Commonwealth Games in Glasgow, Scotland.

Onyema participated in the women’s lightweight category of the Para Powerlifting event.

Onyema, who has a weight class of 48.10kg outmuscled her competitors to win Nigeria’s second Gold medal at the 2018 Commonwealth Games.

She secured a WR lift of 131kg in her second attempt having failed to lift the weight in her first time of trying, she garnered a total of 141.6 points.

Another Nigerian, Lucy Ejike won the Silver medal in the same category after having a clean lift of 133kg in her first attempt, but she couldn’t lift 139kg on both attempts, she finished second with 134.1 points.

Nwosu who has a weight class of 69.10kg outclassed her competitors by amassing 110.4 points after recording clean lifts of 110kg and 120kg respectively.