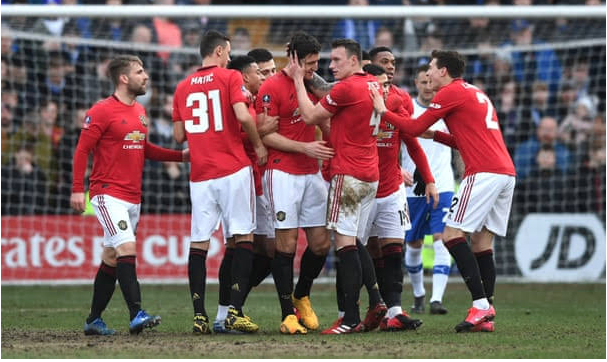 Manchester United defeated Tranmere 6-0 to book a place in the Fa Cup 5th round.

Mason Greenwood put the icing on the cake from the spot to give Manchester United a resounding victory over Tranmere.

The contest was over in the sixth minutes when Fulham defender Tim Ream was sent off few minutes later Gundogan opened the scoring before Silva added the second goal to set City on the way to a big victory.

The hosts have scored 100 goals in all competitions this season.

Liverpool played out a 2-2 draw with Shrewsbury Town in the FA Cup fourth round.

Curtis Jones scored the first goal for Liverpool before Donald Love diverted into his own net to double the lead for Klopp’s side.

Shrewsbury Town fought back in the second half courtesy of a brace from substitute Jason Cummings to earn a replay at Anfield.

Jurgen Klopp has revealed that he will not be playing his first team in the return leg because the premier league will be on a winter break.

“I said to the boys already two weeks ago that we will have a winter break, which means we will not be there,” said Klopp.

“You cannot deal with us like nobody cares about it. I know that it’s not very popular but that’s the way I see it. The kids will play the return leg

“The Premier League asked us to respect the winter break. That’s what we do. If the FA doesn’t respect that, then we cannot change it. We will not be there.”

“We have to respect the players’ welfare. They need a rest. They need a mental rest, a physical rest, and that’s what the winter break is all about,” said Klopp.

“We had to make these decisions beforehand because these boys have families.”