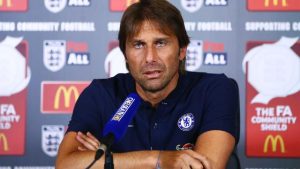 Chelsea could be without midfielder Cesc Fabregas for Saturday’s trip to Anfield, after manager Antonio Conte hinted he may choose to rest the Spaniard.

Fabregas has started 16 of Chelsea’s 19 matches in all competitions this season, and played the full ninety minutes in the 4-0 win away to Azerbaijan Champions Qarabag in the Champions League on Wednesday night, scoring a penalty in the process.

Chelsea boss Conte has been impressed by an improvement in Fabregas’ performances this season, with  The Metro  quoting the Italian as saying: “Last season, maybe he didn’t deserve to start the games but now he’s deserving to play regularly.

Twitter Ads info and privacy
Conte did however reveal that with summer signings Danny Drinkwater and Tiemoue Bakayoko now fit and available to play, Fabregas could be set for a rest, as he added: “At the same time I understand he needs a bit of rest because he’s playing every game.

“Now I have four midfielders in good form and I need to have rotation.”

Chelsea go into the game third in the Premier League, nine points behind leaders Manchester City following a lacklustre start to the defence of their title.

Liverpool are two points behind Conte’s side, and will be looking to bounce back from their second half capitulation in the Champions League on Wednesday that saw them throw away a 3-0 half time lead to draw 3-3 away to Sevilla.

A million reasons to thank this Marlin man