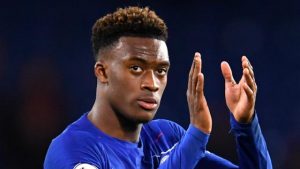 Chelsea were fighting to keep hold of Callum Hudson-Odoi in the January transfer window after Maurizio Sarri struggled to offer chances to the ambitious youngsters but Cesc Fabregas says pressure at the club held him back.

The 18-year-old winger went onto win regular game time in the Premier League but only after a protracted transfer saga with Bayern Munich, whose £35 million offer led to Hudson-Odoi personally handing in a transfer request to his club.

Sarri was then dismayed as he saw Hudson-Odoi rupture his Achilles tendon after four consecutive league starts which included an away trip to Liverpool. Fabregas thinks that Chelsea’s manager was under too much pressure to play the youngster as he looked close to being sacked during various points last season.

“It is difficult because, from a manager’s point of view, you are fighting for your job every day,” Fabregas told Goal about Sarri’s use of Hudson-Odoi last season. “In football today, you could lose two games and be sacked the next day.

“That’s why coaches are sometimes hesitant to make changes or trust someone who doesn’t have the experience or is too young. They can look good in training but then in a game situation, they could freeze or make a mistake.

“The mistake could be in their head in the future if they aren’t strong enough. I don’t blame coaches too much. I know it is very difficult. Callum has taken it all very well. He kept working, he took it with a smile on his face and in the end, Sarri and the whole world knew he deserved to play.”

Fabregas has been a supporter of Hudson-Odoi since he broke through and assisted him for his first ever goal at his boyhood club in the Europa League match against PAOK.

Both players will get Europa League medals despite Fabregas having joined Monaco, while Hudson-Odoi watched the match on TV as he continues his recovery from his long-term injury.

Fabregas recalls first seeing Hudson-Odoi break through with the club, and he says that he knew that he was witnessing something special.

“He is a good boy who is full of confidence,” he added about Hudson-Odoi. “I remember this first training session that we did with Antonio Conte. We did 11 against zero. Just to do a little bit of play and finishing. His finishing was superb.

“I thought, I have never seen this kid before but actually he has something about him. It was very early and only the first day but you could definitely see something. Then the more he trained with us you could see that he was getting more confident. He was taking people on in training and he was not afraid.

“You could see that he had a lot of potential. Slowly, slowly he grew up. He played a little bit more and in the end, there was nothing else that Sarri could do but play him. Very well deserved and it is a little bit the same for Ruben [Loftus-Cheek]. It is unfortunate that they both missed the final.”

170 thoughts on “Fabregas: Sarri was under too much pressure to use Hudson-Odoi earlier this season”