Family welcomes 14th son: ‘I can’t imagine not doing this’

Family welcomes 14th son: ‘I can’t imagine not doing this’ 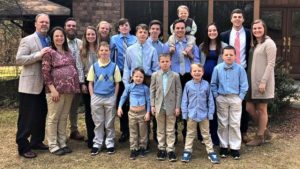 For many parents, the idea of 14 children might seem too overwhelming. But one Rockford, Michigan, family, says they were a�?destineda�? to have the family they do.

Jay and Kateri Schwandt welcomed a son a�� their 14th a�� to their family on Wednesday. And Dad could not be more proud.

The family, with boys ranging in age from 25 years to 2 days, did not know the babya��s gender prior to the birth, In fact, Jay Schwandt said, the couple has never known ahead of time. a�?Thata��s like opening your Christmas presents on Thanksgiving.a�?

The 13 older boys were a�?pretty splita�? on whether they wanted to have another brother or a little girl. And even though this was his 14th time experiencing the birth of a child, it was a�?just as exciting the 14th time around.a�?

a�?We really savored this one,a�? he said, noting that the high school sweethearts are realistically at the end of their baby-making days. a�?Every little kick, every moment felt special.a�?

As for a name, baby Schwandt doesna��t have one a�� yet. a�?Wea��ve narrowed it down to just a couple,a�? Schwandt said. a�?After 13 boys, wea��ve really had to start getting creative.a�? He said the babya��s names would ultimately be left up to a vote of the older boys. Theya��re all coming today to meet their little brother, including the ones who are living on their own and off to college.

Today, therea��s 11 Schwandt boys still living with the parents. Jay Schwandt said though that ita��s his wife who is the a�?glue that holds the family together. Shea��s an awesome mom.a�?

Kateri Schwandt herself is one of 14 kids a�� seven boys and seven girls.

And since the five older boys all have girlfriends, there are females around that a�?feel like part of the family,a�? said Jay Schwandt. The whole clan 13 boys, two parents and five girlfriends recent;y took a vacation prior to babya��s birth. Thata��s not unusual, Jay Schwandt said, noting that the family does many activities as a group.

a�?Therea��s plenty of attention to go around,a�? Jay Schwandt said when asked what advice he would give to a couple who wants a larger family than is seen as typical.

8 thoughts on “Family welcomes 14th son: ‘I can’t imagine not doing this’”