AFL: Another week of AFL, another pair of contentious deliberate out-of-bounds umpiring decisions. PAUL Roos has urged the AFL to make the game easier to umpire, demanding the league call an immediate rules summit.

The Sydney premiership coach said fans had lost faith in the direction of the game amid continuing confusion about its rules.

But umpires coach Hayden Kennedy said the decision to penalise Shane Kersten for a 70m kick towards goal that rolled out of bounds was correct.

The league says the third man up rule is here to stay this year despite the Rules of the Game Committee reviewing it after Round 6.

Umpires will continue to be encouraged to delay a stoppage until a player from each side clearly nominates for the ruck. AFL spokesman Patrick Keane said there was no change in the rule, just a reinforcement that all players at a stoppage had to know who had nominated.

Roos told the Herald Sun too many rules now required too much interpretation from umpires.

He said the league should call upon a group of current coaches, players, umpires and even fans to clarify what the game should look like, then adjust the rules.

“It would be really valuable to get a cross-section of people in a room together and talk through what we want the game to look like,’’ he said.

“Everyone is confused about where the game is heading and what the rules are designed to do.

“There were basic principles we grew up with — protecting the man, no high contact, if you don’t have the ball you can’t be tackled. 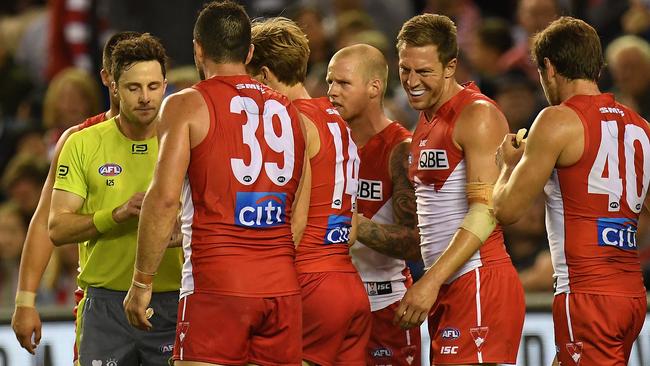 “Now it’s become so grey and difficult for the umpires. Now it’s more a set of interpretations.

“Imagine trying to interpret everything — did he try to keep the ball in, did he make a genuine attempt, did he try to put the ball through the goals?

“It was a set of rules, now it’s a set of interpretations. It must be so hard for umpires to interpret every single time.”

Roos said he would be keen to sit down with umpires boss Peter Schwab and Kennedy to watch a game from their perspective.

“It would be fascinating to sit down with them and see what they see and how they see a game through their eyes.

“It would give a greater understanding of what they value or how they interpret rules.” AFL umpires walk out for the AFL Grand Final.Source:Supplied

Kennedy said there was enough doubt after Zaharakis’ checkside kick from the centre circle – which bounced five times before going out – to call it a mistake.

“The umpire is saying, ‘Is he kicking it to space or is it a skill error where it goes off the side of his boot?’,” he said.

“Looking at the available vision, I would be throwing it in because there is an element of doubt about David’s intent.”

But Kersten’s long shot towards goal was correctly paid deliberate because it did not threaten the goals, bouncing over the line 10m from the behind post.

“The ump has to make a decision as to whether Shane has made an effort to kick at the goals,’’ he said.

“Is he making a realistic attempt to keep the ball in play? We decided on this occasion Shane didn’t so hence the free kick was paid.”