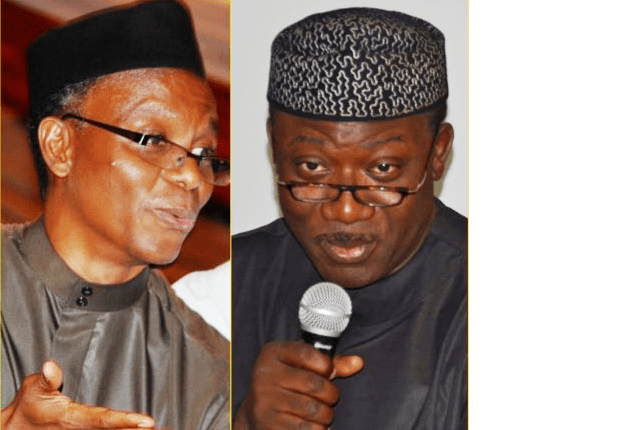 Minister of Mines and Steel Development, Dr Kayode Fayemi may have
thrown his weight behind the threat by the Kaduna State Governor,
Malam Nasir El-Rufai to sack teachers that joined the ongoing strike
in the State.

He also reiterated that teachers competency test remained one of the
major policies of the All Progressives Congress, APC, aimed at
reviving education in the country.

Dr Fayemi, who met El-Rufai in Abuja on Monday night was said to have
saluted the Kaduna State governor for “being a man” and standing firm
on his decision to revive education in the State through Teachers
Competency Test.

Teachers in public secondary and primary schools in Kaduna State began
an indefinite strike action on Monday, over the sack of more than
22,000 of their colleagues. The strike was called by the state chapter
of the Nigerian Union of Teachers (NUT). The government however
threatened to sack any teacher that joined the strike.

A group of youths in the north, under the auspices of Northern Youths
Movement (NYM), had fingered Dr Fayemi as the brain behind the
Competency Test organized for teachers in Kaduna State last year,
which led to the sack of over 22,000 teachers in the State.

The youths said it was Dr Fayemi who brought the consultant that
conducted the competency test, which they said was done purposely to
reduce the number of teachers in Kaduna State and also raise money for
his (Fayemi) governorship election.

Sources very close to Governor El-Rufai told our reporter he met with
Dr Fayemi for over one hour on Monday night to review the ongoing
teachers strike and assured the governor that “heaven will not fall if
the policy of no work, no pay is enforced on the striking teachers.”

Dr Fayemi, a former governor of Ekiti State was said to have lamented
that he could have also insisted on the Competency Test when he was
governor, vowing that the policy will be implemented if APC returns to
power in Ekiti State.