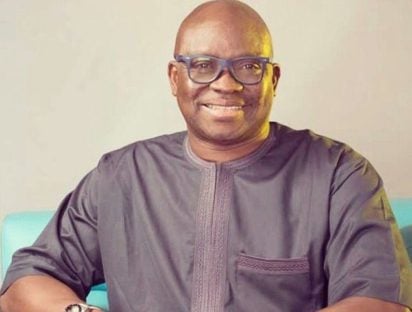 Ekiti State Governor, Mr Ayodele Fayose has declared support for the call by Nobel Laureate, Prof. Wole Soyinka for an organized resistance, through formation of informal organisations against the incursion of herdsmen, calling on governors in all States affected by the herdsmen menace to adopt such measure to protect their citizens.

While saying Nigeria and its people must be protected at all cost, Governor Fayose noted that a�?The comfort our leaders enjoy from their office is momentary. But the suffering of the people may be permanent if the leaders continue to look away as if nothing is happening just because they are enjoying the comfort of their office.a�?

According to a statement on Wednesday, by his Special Assistant on Public Communications and New Media, Lere Olayinka, Governor Fayose said he was particularly happy that notable leaders in the country, especially Prof Soyinka heeded his call for all men of good conscience to speak up against the wanton killing of Nigerians by herdsmen, who are acting more like terrorists.

He said Ekiti State will further strengthen local hunters in the States by formally bringing them together under Ekiti State Hunters Association (EKSA) and equipping them to protect our people and their sources of livelihood.

Governor Fayose, who said that the herdsmen menace has become a major security and economic threat in the country, added that it was clear that the federal government was not ready to do anything to stop killings of Nigerians and invasion of peoplea��s farms by herdsmen.

The governor maintained that those approaching the herdsmena��s menace with ethnic and religious sentiments were not helping the country, saying; a�?What Nigeria is witnessing now is pure criminality. It is terrorism in the name of cattle rearing and anyone defending the killing of fellow Nigerians and destruction of farmlands is an enemy of this country.

a�?If our people have decided to embrace farming, how do we reconcile a situation where their farms are either being destroyed by cows or cruelly set ablaze by supposed herdsmen?

a�?Today, in many parts of the country, people are even afraid to go to the farm for fear of being killed by supposed herdsmen. How do we promote agriculture under this kind of situation?

a�?Therefore, I salute the courage of Prof Soyinka for speaking out, though late, but it is better late than never.

a�?Those armed herdsmen are nothing but another form of Boko Haram insurgents and they must be treated as such.a�?

Power Back In Maiduguri 8 Days After Blackout