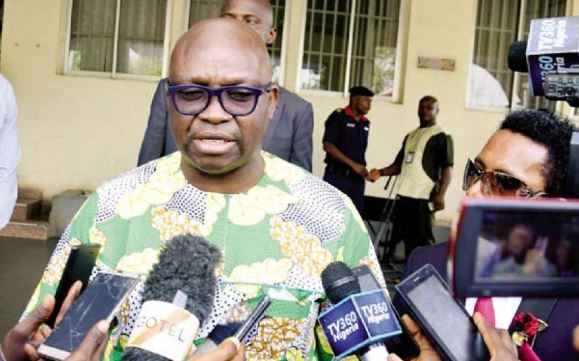 Media Aide to Mr. Ayodele Fayose, the immediate past Governor of Ekiti State, Lere Olayinka has said the State Governor, Dr. Kayode Fayemi will rather be left to his master, the devil, since he has refused to act like someone with godly mind since he started enjoying the benefits of the mandate the powers that be in Abuja helped him to steal.

Olayinka, who was reacting to Fayemi’s statement yesterday, that he was not interested in probing Fayose and that he has left him in the hands God, said “he (Fayemi) should rather be sincere enough to tell the public that he has checked all the books and found nothing incriminating against Fayose.”

In a statement issued on Tuesday, he described Fayemi’s new position that he was not interested in probing Fayose as an afterthought, saying; “After going through all the books and could not find anything incriminating, he is now saying he won't probe, who is telling him not to probe?

“Has he forgotten that it was at the same State House, Abuja that he said on July 19, 2018 that he was going to probe Fayose? So what has changed other than the fact that he has failed in his desperate bid to get evidences of corruption against the former governor?

“Fayemi should act like someone with conscience for once by letting the people know how he has been carrying operatives of the EFCC up and down, looking for what Fayose did and did not do. He should tell Nigerians how he harboured EFCC officials in the government house for over two weeks, lavished millions of naira on them and also misled them to go about sealing off properties belonging to innocent people in Ado Ekiti under the guise that they belong to Fayose.

“The fact is that Fayemi has found nothing against Fayose and that's why he has adopted a face-saving tactic.”

Speaking further, Olayinka said; “No one is asking Fayemi not to probe his predecessor. He is the one who was not bold enough to appear before a duly constituted probe panel, Fayose is not afraid and that was already demonstrated by the former governor’s unprecedented submission of himself to the Economic and Financial Crimes Commission

(EFCC) less than 24 hours after he left office.
“Let him set up a duly constituted judicial commission of inquiry today, Fayose will personally appear before the panel.

“We only hope that Fayemi too will do the same when he is eventually kicked out office so that he can explain how he acquired those Multi-Billion Naira properties in Lagos, Ilishan Remo in Ogun State, Abuja and abroad.”

NNPC At Loggerheads With NANS Over Discrimination In Recruitment Process

‘Nuclear war could start at any moment’

7 thoughts on “Fayose is leaving you to your master, the devil, Aide tells Fayemi”