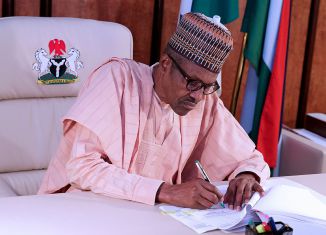 Ekiti State Governor, Mr Ayodele Fayose has queried President
Muhammadu Buhari’s approval of $1 billion for the procurement of
security equipment to fight Boko Haram insurgency, describing it as
a�?pooling of public funds for the purpose of funding President Buhari’s
reelection as well as the coming governorship elections in Ekiti and
Osun States.a�?

The governor demanded to know whether or not the $1 billion was from
the Excess Crude Account (ECA), adding that; a�?it will be illegal and
against the principle of federalism that operates in Nigeria for the
President, who is the head of just one of the federating units to
approve spending of fund belonging to the three tiers of government
without the consent of heads of other federating units.

In a statement issued in Ado Ekiti on Wednesday, and signed by his
Special Assistant on Public Communications and New Media, Lere
Olayinka, Governor Fayose asked; a�?When did the National Assembly
approve the spending of the $1 billion? Or can the President spend $1
billion belonging to Nigerians without the approval of the National
Assembly?a�?

He said a�?Nigerians required explanations from the federal government
as to where the $1 billion will be sourced because the President
lacked power to unilaterally spend money from the Excess Crude
Account. Not even when there is a pending suit by Ekiti State Local
Council Chairmen, challenging the powers the 36 state governors to
purportedly execute the constitutional duty of the Federal government
without the their consent.a�?

a�?Another question the federal government must answer is; which
insurgency are they buying arms worth N370 billion to fight? Is it the
same Boko Haram that they told Nigerians they completely defeated?

a�?Since they said they have defeated Boko Haram, and later told
Nigerians that they had ceasefire agreement with the insurgents, what
else do they need a whopping sum of $1 billion (over N370 billion)
for; if not to fund the 2019 elections?

a�?Also, up till now, the government is yet to give satisfactory
explanations as to the abduction and return of the Dapchi School
Girls. With the hurried approval of $1 billion, is it not being
reinforced that the Boko Haram insurgency has become a source of
looting public fund by this government?

a�?It is on record that Transparency International (TI) once said in its
report that some top military officials in the country were feeding
fat from the war against Boko Haram by creating fake contracts and
laundering the proceeds in the United States, United Kingdom and
elsewhere.a�?

The governor reiterated his challenge to the federal government to
make available to Nigerians, how the money released by international
donors for the fight against Boko Haram was spent.

He said; a�?Like I have maintained, they are building a very huge
financial war chest towards the 2019 elections and our treasury is
daily being looted to achieve this. One of such means is the $1
billion approved by the President, purportedly for the procurement of
arms to fight a Boko Haram insurgency they claimed to have defeated.a�?

Group Petitions EFCC, Seeks Probe Of Osinbajo Over N90bn Allegedly Released To Him By FIRS