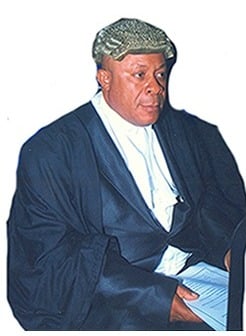 Ekiti State Governor, Mr Ayodele Fayose has reiterated his call for the sack of controversial Federal High Court Judge, Okon Abang, saying “Justice Abang has polluted the judiciary enough and the National Judicial Council (NJC) must save the judiciary from what has now become the Abang’s embarrassment by showing him the way out of the bench.”

In a statement issued on Thursday, by his Special Assistant on Public Communications and New Media, Lere Olayinka, Governor Fayose said; “Specifically, on August 18, 2016, five Appeal Court justices in their judgment in the case of Abia State Governor, Okezie Ikpeazu Vs. Samson Ogah, said Justice Abang committed a rape on democracy!”

He said Justice Morenike Ogunwumiju, who delivered the lead judgment in Okezie Vs. Ogah went further to say that Justice Abang “committed grave violence against one of the pillars of justice” relating to fair hearing, turned the head of the law upside down in his conclusion that it was the appellant that should bear the burden of proof, embarked on

a wild goose chase and that he spoke from both sides of his mouth.

The governor said; “It is also on record that a three-member panel of Appeal Court judges led by Justice Ibrahim Salauwa said the judgement delivered by Justice Abang on October 14, 2016 was as ‘fraudulent as it was violent’ and that the judge acted like Father Christmas.

“How can a judge like Abang that has been adjudged severally as giving fraudulent judgments and acting like Father Christmas still sit in judgment over cases involving Nigerians?

“With Abang still in the judiciary, it should further be clear to all Nigerians that President Muhammadu Buhari’s All Progressives Congress (APC) government is not interested in sanitising the judiciary but only out to persecute unfriendly judges who are not doing its bidding.”

Speaking further, Governor Fayose said; “For the record, Justice Abang is not new to abuse of court process. On many occasions, he sat on appeal on judgments delivered by similar courts of concurrent jurisdiction.

“For instance, on September 22, 2014, he appointed the law firm of Olisa Agbakoba as the receiver/manager on behalf of the Asset Management Corporation of Nigeria (AMCON) over Bi-Courtney assets, despite the subsisting order of Justice Mohammed Liman (also of the Federal High Court) delivered on November 4, 2011, restraining the

federal government and its agencies from taking any steps to takeover Bi-Courtney Group.

“Also, Justice Abang elevated his court to an Appeal Court status by sitting on appeal on a judgment delivered on the PDP leadership tussle by a similar court of concurrent jurisdiction presided over by Justice Abdullahi Liman of the Federal High Court sitting in Port Harcourt.

“No doubt, Justice Abang is reputed for controversial orders, rulings and pronouncements to the extent that even some detainees of the Economic and Financial Crimes Commission (EFCC) had fingered him as one of judges being used by the commission to secure long detention orders against perceived enemies of President Muhammadu Buhari’s government.

“Perhaps, it is for the reason of him (Abang) being available for use against perceived enemies of President Buhari and his government that he is still being kept in the judiciary despite his many controversial and embarrassing orders.

“For example, the usual practice is that when a party in case notices bias by a judge, he/she petitions the Chief Judge of the court to complain and possibly appeals that the judge be changed. But Justice Abang is noted for stubbornly holding on to cases that he has vested interests in even when parties in such cases raise notices of

“In the alleged corruption trial of Olisa Metuh, Abang was accused of bias and being Metuh’s classmate at the Nigerian Law School between 1987 and 1988, he (Abang) refused to hands off the case like other judges would have done.

“In my opinion, Judges who give fraudulent judgments are even more dangerous than armed robbers and one will be right to say that those running after judges for alleged corruption and excluding a judge like Abang may not be far from being the beneficiaries of his (Abang) fraudulent judgments.

“Therefore, like I have said before, the judiciary, being the last hope of the common man must be purged of elements like Abang and NJC must do the needful by sacking him forthwith so that the bench can have a new lease of life.”

There’s bound to be corruption in foreign exchange – Osinbajo

We Did All We Could To Save Aid Worker Hauwa Liman, Says Lai Mohammed