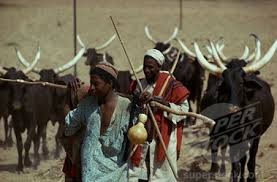 HERDSMEN in Ekiti State have taken a traditional oath binding on them to assure the host communities in Ekiti and the South West, that they would no longer behave unruly, kill or allow their cows to stray into farms. This was as Governor Abiola Ajimobi of Oyo State ordered the arrest and prosecution of herdsmen carrying guns and other dangerous weapons across the state.

The traditional oath, revealed to be an effective cultural sanction on herders as its violation, is believed to bring tragedy on the culprit, was administered by the Sarkin Fulani of Kwara State, Alhaji Ardo Mairero, at a peace meeting of all parties involved in herdsmen challenge in the state. It was resolved at the meeting that a�?all herders must obey the anti-grazing and relevant laws of the land.a�?

Besides, the meeting commended Governor Fayose for being a peaceful leader, a�?who represents hope for all.a�? Those present at the meeting include, Alhaji Ibrahim Shekarau, who represented the Emir of Kano; Alhaji Mohammad Leewa, National President, Miyetti Allah, Mohammad Kiruwa, Governor Ayodele Fayose, Ekiti Deputy Governor, Olusola Kolapo; Secretary to State Government, Modupe Alade; Chief of Staff, Dipo Anisulowo; Agriculture Commissioner, Kehinde Odebunmi and other national and zonal Miyetti Allah leaders. Also, a communiquA�, co-signed by governor Fayose, Alhaji Shekarau, who represented the Emir of Kano, Muhammad Sanusi II, Mrs. Alade, Alhaji Kiruwa and others, was released through the office of the Chief Press Secretary to Governor Fayose, Mr. Idowu Adelusi. Adeslusi said: a�?Of most significance of the peace meeting of February 19 by the stakeholders was the traditional oath taken with kola nuts as agreement that the herdsmen in Ekiti will not behave unruly any longer, kill or allow their cows to stray into farms.a�?

a�?It was administered with kola and sharing of the kola, which is a Fulani tradition that is binding on the initiators. With this oath, issues of robbery, killing, damaging of farms and kidnapping among others being allegedly perpetuated by herders are over in the state. The meeting and signing of the memorandum by all parties lasted for two hours between 11pm on Monday 19 to 1am of Tuesday, February 20,a�? he said.

The communiquA� reads in part: a�?A truce meeting, initiated by the Emir of Kano and the Governor of Ekiti State over pastoralists menace was held on Monday, February 19. a�?The representative of Emir of Kano, Alhaji Ibrahim Shekarau, conveyed the concern of the Emir over broken down relationship between herdsmen and host communities that has led to loss of lives in Ekiti State and other parts of the country. a�?The Emir commiserated with the families of those whose lives have been cut short due to the attacks and reprisals of herders and associated consequences.a�?

a�?Similarly, the leadership of the Miyetti Allah Cattle Breeders Association and patrons condemned in strong terms any form if killing that has taken placea�?, it stated. It also resolved that a�?herdsmen must stop attacks on any member of the host communitiesa�? even as they warned that any herder that breaches the peace a�?should be prepared to face the wrath of the law, and Ekiti people should not provoke the herdsman or kill their cattle.a�?

It also agreed a�?pastoralists/farmers crisis and killings, under any guise must stop immediately. The meeting supports the anti-night grazing stand of the law because it protects the interest of all parties, and the law taken its course in the violation of letters of these resolutions.a�? Ajimobi orders arrest of gun wielding herders Meanwhile, to further nip the farmers/herdsmen clashes in the bud, governor Ajimobi has directed that a headcount of all Fulani herdsmen in the state should be taken for proper data collection and to prevent wanton destruction of lives and farmlands.

The governor gave the directive at a stakeholders’ meeting aimed at dousing the tension between the herdsmen and farmers. At the meeting which was well-attended by the representatives of farmers, herdsmen, security agencies and other stakeholders, held at the House of Chiefs, in Ibadan, the governor said the decision was taken to make it easier to separate genuine pastoralists from criminally-minded herders.

Some chiefs aid herdsmen activitiesa�� Oyo Farmers In his remarks, leader of Farmers Association in Oyo State, Mr. Ayoola Ajibesin said that the state House of Assembly had, in August 2017, called a peace meeting between the farmers and herdsmen where recommendations were made by both parties, noting that nothing concrete had been done since then. He also accused some local chiefs, particularly in the Oke Ogun axis of the state, of aiding and abetting herdsmen after collecting calves as gifts from them, particularly those with criminal tendencies, saying that this had contributed to the crises.

We’re not criminalsa�� MACBAN leader Also, the state chairman of MACBAN, Alhaji Yakubu Bello who spoke in Yoruba, exonerated his men from criminal activities and called on government to apprehend those who are criminals among herders. Bello said: a�?Government should do the needful to maintain law and order. For us, peace is very germane.a�? We are not happy with what happened in Iseyin recently.

Nobody will be happy witnessing the death of another fellow human being. We are all useful to one another.a�? a�?I must also state that the fact that one Fulani is a criminal does not make the whole Fulani criminals. Our normal instruments are cutlasses, knives, rods and hats. Anybody that carries guns should be arrested. The media has not been fair to us by their sweeping generalisation.a�?

A Black Woman was not Made from Ribs of a Man