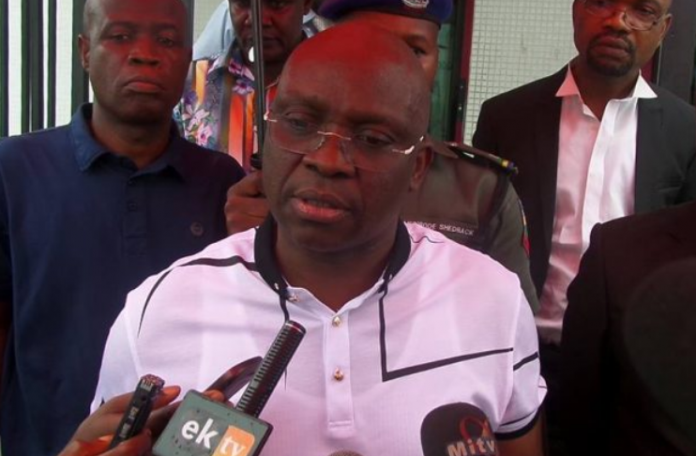 The second witness called by the Economic and Financial Crimes Commission (EFCC) in the trial of former Governor of Ekiti State, Ayodele Fayose, today, Dr. Abiodun Oshode, ended up contradicting himself by telling the court that he has never met a certain Taofeeq, whom he had earlier said did not fill deposit slip because he could not write.

He also said that the bank reported the N1.219bn cash lodgment to the authorities as stipulated by the financial regulations and that “the transaction was not stopped because it was deemed appropriate.”

Oshode, who is the Zenith Bank Zonal Head for South West in charge of Ondo, Ekiti and Kwara States had said under oath while giving evidence before Justice Mojisola Olatoregun on November 19, 2018 that Taofeek, who was alleged to be involved in the movement of about N200 million cash from Afao Ekiti to the Zenith Bank branch in Ado Ekiti, did not personally fill the deposit slips for lodgement of the cash because he does not know how to write.

While being led in evidence by the EFCC counsel, Rotimi Jacob (SAN), Oshode had told the court that sometime in 2015, Mr. Abiodun Agbele contacted him regarding some cash lodgments that were to be paid into the account of Still Earth Limited domiciled with the Lagos branch of the bank.

He said the cash was in Afao, Ekiti State and the bank sent a bullion van to move the cash to the bank’s branch in Ado-Ekiti.

Oshode said from the Statement of account of Earth Still Limited tendered by the prosecition, there were twenty-one lodgments in cash paid into the account by one Mr. Taofeeq on the April 16, 2015.

However, while being cross-examined by the defense counsel, Olalekan Ojo (SAN), Oshode said he has never met Taofeek and that he did not personally witness the transaction in Ado Ekiti.

Ojo had asked; “Have you ever informed the operatives of EFCC that you know why Taofeeq did not fill the tellers?”

Oshode answered; “I don’t think so.”
Ojo then asked; “You told Justice Olatoregun that this Taofeeq that you have never met before did not fill the tellers because he does not know how to write,” to which Oshode said; “Yes.”

The witness’ contradictory evidence became a subject of heated legal argument between the EFCC counsel, Rotimi Jacob (SAN) and Fayose’s counsel as Jacob’s attempt to use the advantage of re-examination to get Oshode to explain why he gave evidence different from what he said before Justice Olatoregun was objected to by Ojo.

After exchange of legal fireworks between Jacob and Ojo as to the propriety or otherwise of seeking explanation from Oshode on his contradictory evidence, Justice Chukwujekwu Aneke, adjourned till tomorrow for ruling on the objection and continuation of trial.

Earlier, Oshode had told the court how he was informed of the movement of N1, 219,000,000 cash from Akure Airport to the Akure branch of Zenith Bank by Dr. Lawrence Akande, the Zenith Bank Zonal Head for South West 2.

Oshode said the bank rendered the service at the request of Abiodun Agbele – an aide to Fayose.

He told the court that a former Minister of State for Defence, Musiliu Obanikoro, was present during the operation at the airport “but we did not interact.”

Oshode said on taking the N1.219bn cash to the bank, Agbele supplied three bank accounts into which the money was to be lodged.

He listed the three accounts as those of Privateer Nigeria Limited; Spotless Investment Limited and “a personal account of His Excellency (Fayose).”

When asked under cross-examination by Fayose’s lawyer, Mr Ola Olanipekun (SAN), whether “seeing such volume of money being paid into your bank,” the bank reported the N1.219bn cash lodgment to the authorities as “illicit or suspicious,” Oshode said, “It was reported.”

body.
When Olanipekun asked him that “pursuant to the report, did you get any instructions to stop the transaction?” Oshode said, “No.”

When the defence counsel asked whether Oshode would agree with him that “the transaction was not stopped because it was deemed appropriate,” the banker said he agreed.

“You also agree that the defendant invited your bank because they too believed the transaction was appropriate?” Olanipekun asked and responding, Oshode said, “Yes.”

Oshode had earlier read to the court some tellers with which cash lodgements were made, bearing “Ayo”.

But when the second defence counsel, Mr Olalekan Ojo (SAN), told Oshode that “At no time did you see the 1st defendant (Fayose) filling any teller at any branch of your bank, either in Ekiti or Akure,” the banker said, “Excellency will not do that.”

He also told the court that the lodgments said to have been made on August 4, 2014 by one “Ayo” could not have been from the N1.2 billion allegedly evacuated from Akure Airport because the bank must have concluded bundle-counting, detail-counting and processing of the cash long before then.

The witness further confirmed that the lodgments in the account of Earth Still Limited referred to in exhibit C51, which took place on April 16, 2014 could not have been part of the N1.2 billion.