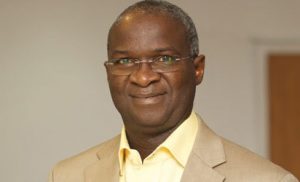 The Federal Executive Council (FEC) has approved N143.2 billion contracts for construction of roads and bridges across the country.

Among these is an additional N80 billion voted for the Lagos -Ibadan expressway. This will take care of the rehabilitation of 84 kilometers section two (Ibadan to Sagamu) of the nation’s busiest expressway.

The Council last month approved N64.1bilion to be spent on section one (Lagos to Saganmu)

Minister of Power, Works and Housing Babatunde Fashola stated this at the end of an eight- hour FEC meeting chaired by Vice President Yemi Osinbajo at the Presidential Villa.

Other minister at the briefing are: Minister of Information Lai Mohammed, Minister of Transportation Rotimi Amaechi, Minister of Environment Jibrin Ibrahim, and Minister of Water Resources Suleiman Adamu.

Fashola said: a�?The contract awarded to RCC at the cost of N96 billion before is now revised by N80.199 billion to take the total cost to N176.503 billion. The major component is the change of the type of bitumen, the swamps that have been encountered, the depth of the design for the road, which is 1,100 millimeters, roughly about 43 inches of reconstruction from base.

a�?As you might know, the road is being expanded from two to three lanes on both sides. Also we are installing Glover leavers, toll plazas and service lanes. All these to accommodate the changes that have taken place, which were not conceptualised when the road was first built.a�?

He said FEC also approved N18.87 billion for the rehabilitation and repair of the Third Mainland Bridge in Lagos.

He said: a�?The repair of the Third Mainland Bridge was conceived in 2011 but was not awarded because there were no budgetary provisions.

a�?But we have created budgetary provision for it as part of our national bridge maintenance strategy because our bridges haven’t been maintained for decades. This was for N18.87 billion to Borini Promo.

a�?Essentially, what they will be doing is pile repairs. Piles are the foundations that hold the bridge. We are starting with the first 33 piles that are in critical conditions, then another set of 19 piles, and then 44 piles. And a general maintenance of 177 piles that form the entire foundation of the bridge. The other work is to replace the expansion joints.a�? he said.

According to him, Council also approved N38.03 billion to RCC for the 72 kilometers Ninth Mile to Orukan road in Enugu State.

He said that FEC also okayed award of remedial interventions in four roads in the country.

The four roads are part of the 44 roads whose approvals were received.

The remaining 40 roads, he said, were being dealt with at the ministerial level because of the amount involved.

He said that Council also approved a contract for Ile bridge in Osun State at the cost of N2.546 billion.

Fashola also said that Council approved memo on behalf of Transmission Company of Nigeria for purchase of 50 gas circuit breakers at the cost of N120 million in favour of CG Industrial.

Minister of Transportation Rotimi Amaechi said that FEC constituted a committee to take inspection trip to the East-West road towards completing the project (NATION).