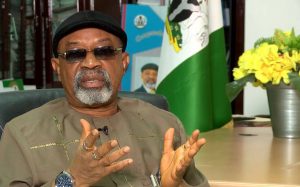 The Federal Government has appealed to aggrieved workers of the National Population Commission (NPC) to resume duty assuring them that their grievances were being addressed.

Dr Chris Ngige, the Minister of Labour made the call at a stakeholders meeting to resolve the crisis in Abuja.

Mrs Rita Agaba ,the President of the NPC workers union, made this known to the News Agency of Nigeria (NAN) on Friday in Abuja.

a�?The Minister of Labour and Productivity had a meeting with stakeholders to address the issues raised by the union.

a�?He pleaded that we return to our duty while he should be given time to look into the issues raised.

a�?We are expecting to get feedback from Dr Chris Ngige by end of January,” she said.

The union leader also confirmed that the Directors and Commissioners of commission passed a vote of no confidence on the reappointed Director-General, Dr Ghaji Bello, at the meeting.

According to her, the no-confidence vote was passed by national commissioners and directors because their input in the affairs of the commission was not respected.

However, Agaba said that the offices of the commission nationwide had been re-opened, but the workers adopted a work-to-rule policy to press their demands.

The workers are protesting the reappointment of the director-general and demanding for improved welfare.

Efforts to get Bello’s reaction to the development by NAN including visits to his office and phone calls failed.

The Chairman of the commission, Chief Eze Duruiheoma, had earlier told newsmen that the Office of the Secretary to the Government of the Federation is addressing the case.

He said that inadequate funding was hampering the smooth operations of the commission.

Duruiheoma also said that the development was not politically motivated and appealed to the striking workers to return to work.