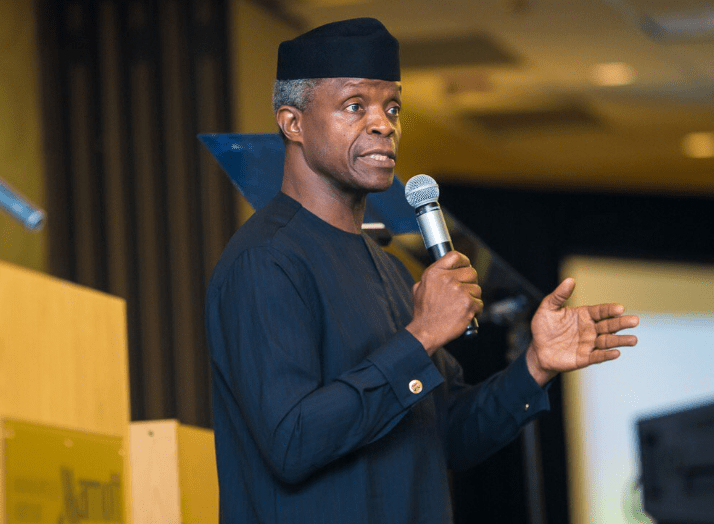 The Vice President, Professor Yemi Osinbajo has said that federal government is presently pursuing a rigorous domestic and wide consultative process with all stakeholders in the public and private sectors of the country through Memorandum of Understanding, (MOU) towards establishing the African Continental Free Trade Area (AfCFTA).

The Vice President also explained that it was because federal government recognized the benefits of promoting intra-African trade for development, job creation, poverty reduction and modernization.

Osinbajo stated this yesterday during the Africa Trade Forum 2018, AfCFTA Ratification and Implementation, with the theme: “A Game Changer for African Economies,“ which was held in Lagos.

He also noted that the AfCFTA is probably the most significant Pan African trade agreement in this generation, the Vice President stated that Nigeria, being “possibly the largest market in Africa today, is most likely to benefit the most or lose the most from the implementation of the agreement.”

Osinbajo's remark was in response to the nation-wide stakeholder engagement on 22nd October. President Muhammad Buhari, at a meeting with stakeholders, inaugurated and established the “Presidential Committee on Impact and Readiness Assessment on the African Continental Free Trade Area”.

He added that the Presidential Committee was at work in full steam with a view to have a final report which will be sent up to Mr. President in the next 10 weeks.

“I believe that most African policy-makers would accept these feedbacks from Nigeria as having wider validity, especially as having some validity with their own economy as well.

“At the inauguration of the Presidential Committee on AfCFTA last week, President Buhari emphasized, while commending the AfCFTA process, as worthy and commendable, he said that the agreements we negotiate should be properly understood by those that would implement them, and be accompanied with an implementation plan.

“As the President said, “the AfCFTA is worthy and commendable.” As a Government, we consider that structural reforms should address the legitimate concerns raised by stakeholders.

“As Chairman of the Nigerian Economic Management Team (EMT), I am pleased to read and hear that fellow African countries consider Nigeria’s domestic consultative process with Stakeholders as an applicable model. We engaged, constructively and robustly, with stakeholders, not only on the AfCFTA, but also on Trade Policy Writ Large.

“The central message was support for the AfCFTA, based on a clear definition of increasing intra-African trade. The core feedback is to prepare thoroughly and, inter alia, ensure that the preferences of the AfCFTA would neither be abused nor be enjoyed by third parties that were not part of the negotiations.”

Also speaking in Lagos on Friday at the opening of the Lagos International Trade Fair, the Vice President stated the Federal Government’s unwavering commitment to policies and reform efforts geared towards enhancing diversification and structural reform of the economy, through massive investment in infrastructure and human capital.

Osinbajo also said that, “building an enabling business environment is a crucial plank of our economic policy. It is pivotal for the enhancement efficiency and fostering transparency.”

“These policies have successfully enhanced productivity, increased the share of manufacturing in Nigeria’s total export earnings and a drastic reduction in susceptibilities to shocks that our economy had been frequently exposed, to on account of commodity volatility which we face constantly.

“We have taken on the key infrastructure challenges that have stifled SME growth and development in the country, by seeking innovative ways to bridge the significant infrastructure gap and at the same time, creating an enabling environment in which it is easier to do business.

“Since 2016, in two budget cycles, we have spent N2.7trillion in capital and mostly on infrastructure and this is the largest capital spend in our nation’s history, despite the fact that the country has earned 60% less than in the previous last 5 years.

“We focused on roads, power and on a new national rail network, among others. The Lagos-Kano rail which starts from the Lagos Port, is an important infrastructure for us, because once the Lagos-Ibadan end of it is completed by the end of the year,.

“Particularly because it starts from the ports, it will greatly relieve our roads from a lot of the trucks that go from point to point, out to the West of Nigeria and to the farthest part of Nigeria,” Osinbajo said.

He however stressed that collaboration between the private and public sectors if the country was important for economic growth and development of the nation.

Attack on protesters is attack on the soul of democracy: – says HURIWA: