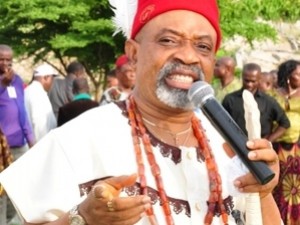 This is even as all the roads leading to Oko community in Orumba North Local Government Area of Anambra State have been given facelifts in readiness for the burial of the late Second Republic Vice President, Dr Alex Ifeanyichukwu Ekwueme on Friday.

The Minister of Labour and Employment and member of the national burial committee, Dr. Chris Ngige, after visiting Oko to inspect preparations for the burial, expressed satisfaction with the level of work already done.

He said: a�?I am reasonably satisfied with the preparations. I was here last week for inspection and between then and now, work has progressed.

The contractors have assured us that all the roads leading into Oko will be very motorable before the burial ceremonies start on  February 1 at Oko.

a�?The tomb, which is being financed by the Federal Government, is okay and the contractors have assured us that it will be handed over to us  on Tuesday.

The helipad, which the Vice President will use, has also been identified. a�?Anambra State government is also cooperating because it is constructing some internal roads in Oko and its environs to facilitate movement.

The leader of the medical team, Professor Igwegbe of Nnamdi Azikiwe University Teaching Hospital, Nnewi is already on ground his with men and I believe that in the next 48 hours, everything will be in place.a�?

While giving details of the efforts being made by the Federal Government to ensure a successful burial for Ekwueme, the Minister further said:

a�?So the insinuation in some quarters that government has not done much is not true. What Buhari has committed into the burial is nothing less than N1 Billion.

The family can also not say that it is not carried along because they are represented in all the burial committees.

a�?The first son of the late Vice President, Pastor Obi Ekwueme is a member of the national burial committee and the committee permitted him to send a member in all the sub-committees we have.a�?

Ohanaeze youths hold church service for him; urge FG to name Abuja National Stadium after him Meantime, Ohanaeze Ndigbo Youth Council, OYC, weekend, held a memorial Church service in honour of Dr. Alex  Ekwueme as part of the activities lined up by the group to honour the former Vice President who will be buried this week in his home town, Oko, Aguata Council of Anambra State.

According to Engr. Obinna Adibe, Publicity Secretary of OYC, the church service was held at the Seventh Day Adventist Church Umuahia Township, Abia State with the group led by Mazi Okechukwu Isiguzoro, saying the event was the beginning of activities it lined up a�?to mourn the icon of democracy and great Igbo leader.a�?

Ohanaeze Youths urged a�?Ndigbo to mourn Dr. Alex Ekwueme for six days and to wear black bangles as a way to show respect and mourn our Igbo heroa�?.

OYC also called on President Muhammadu Buhari to name Abuja National stadium after the later Vice President as a way to appreciate his immeasurable contributions to return democracy to Nigeria in 1999 after years of military dictatorship.

As part of other activities lined up to honour the political icon, OYC said that a novelty football match between Ohanaeze Ndigbo Youth Council Worldwide and Biafra agitators at Oko, the home town of Dr Alex Ekwueme on  Tuesday, 30th January 2018.   a�� Vanguard

29 thoughts on “FG has spent N1billion on Ekwueme’s burial: Ngige”