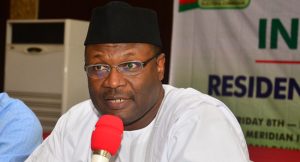 The Independent National Electoral Commission on Thursday released the final list of presidential and National Assembly candidates that would participate in the forthcoming general elections.

Conspicuously missing in the list are the names of the governorship and National Assembly candidates of the All Progressives Congress in Rivers and Zamfara states were missing on the list.

The list published on INEC official website was signed by the Secretary of the Commission, Mrs Rose Oriaran-Anthony.

The candidates and their running mates include President Muhammadu Buhari and Vice President Yemi Osinbajo of the All Progressives Congress (APC), Atiku Abubakar and Peter Obi of the Peoples Democratic Party (PDP).

Others are Omoyele Sowore of the African Action Congress (AAC); Dr Obiageli Ezekwesili of Allied Congress Party of Nigeria (ACPN); Christopher Okotie of FRESH, as well as Prof. Kingsley Moghalu of the Young Progressives Party (YPP) among others.

The commission, however, left vacant, the columns for the names and details of the Social Democratic Party (SDP) presidential candidate and his running mate, with remarks “court order'' and “party yet to submit name of candidate.''

It will be recalled both Prof. Jerry Gana, former Minister of Information and Donald Duke, former governor of Cross-River are engaged in a legal battle in the Court of Appeal as to who is the authentic candidate of the party.

The commission also excluded the name of APC candidates for the National Assembly election in Zamfara and Rivers states.

A Federal High Court in Abuja had also stopped the APC from presenting candidates in Rivers and Zamfara following the inability of the party to resolve its internal crises on the conduct of its primaries.

The implication of non-inclusion of the APC candidates on the list is that the party would not partake in the next month's federal legislative elections in Zamfara and Rivers.

This implies that the three senatorial seats and seven House of Representatives seats in the two states which are currently being occupied by the APC, will be lost come February.

INEC said the decision was hinged on the fact that the APC failed to conduct primaries for the National Assembly, governorship and state assembly elections, adding that the October 7, 2018 deadline had lapsed.

Female candidates in both the presidential and vice-presidential categories stood at 26, while the People Living With Disabilities were not represented.

The academic qualifications of the candidates were also displayed.

Meanwhile, Punch reports that the the two factions of the Rivers State APC have assured their members that their candidates will contest the 2019 general elections.

According to the newspaper, Mr. Chris Finebone, the Publicity Secretary of the Rivers State APC loyal to the Minister of Transportation, Rotimi Amaechi, and Peter Odike, the factional Chairman of the Magnus Abe-led APC, in separate interviews with one of our correspondents, urged their members to be calm, insisting that the party at the state level would contest the forthcoming elections.

Odike said, “We are winning our appeal and after the appeal, INEC will come out with another list and publish it. Time is not against it because 30th (of January) is the last day.”

Finebone said the ruling of the Appeal Court, which confirmed the nullification of congresses held by the party, would not affect his party chances of contesting in the general elections.

I am in the presidential race to release Nigeria from shackles of misrule: Dakwanbo