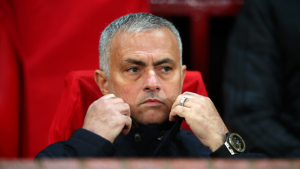 Jose Mourinho has said finishing second in the Premier League with Manchester United was one of the best achievements of his career.

The Portuguese steered the Red Devils to a runner-up position in the Premier League last term, losing out only to Pep Guardiola’s Manchester City,  but he was then sacked in December last year after a disappointing start to the season.

United have shown  perfect form since the appointment of Ole Gunnar Solskjaer as caretaker manager  though and the Norwegian seems to have added renewed energy to the squad, with  Paul Pogba recently saying he was unhappy with negative tactics before Solskjaer’s arrival.

But Mourinho has defended his reign, and told  beIn sports : “I also think that sometimes we think what we see, but we don’t know what’s behind the scenes. And that influences what we see.

“I think that is a fundamental thing. If I tell you, for example, that I can see that one of the best jobs of my career was to finish second with Manchester United in the Premier League?

“You say ‘this guy is crazy. He won 25 titles and he’s saying that second position was one of his best achievements in football’.

“I keep saying this because people don’t know what is going on behind the scenes.

“And sometimes we, on this side of the cameras, we analyse things with a different perspective.”

Mourinho was often criticsed for his defensive style at United, but hit out at those who question his methods.

“If you speak about Guardiola, about [Carlo] Ancelotti – about the ones where obviously I belong – that have a career of victories for long, long periods. Where are the young ones with a real impact in terms of results? Where are they?”

Mourinho was unhappy with the Reds’ transfer policy last summer, and hit out at the club’s inability to sign a centre-back during their pre-season tour in the USA.

United failed in attempts to lure Harry Maguire and Jerome Boateng to the club while a last-minute bid for Diego Godin never lead to anything.

The Portuguese also criticised a number of players on his books, slamming Luke Shaw, Marcus Rashford and Jese Lingard for lacking maturity earlier this term.

Rashford has turned his form around since Solskjaer’s arrival, and combined with Pogba for United’s goal in their 1-0 win over Tottenham on Sunday.

10 thoughts on “Finishing second with Man Utd one of my greatest achievements: Mourinho”