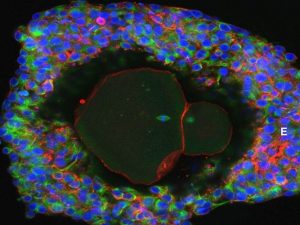 Scientists in Scotland have produced the first fully-developed human eggs grown in a laboratory, saying the breakthrough could lead to improved fertility treatments.

The scientists at the University of Edinburgh said on Friday they had cultured egg cells, after their removal from ovarian tissue at the earliest stage of development, a�?to the point at which they are ready to be fertilised.a�?

a�?The advance could safeguard the fertility of girls with cancer ahead of potentially harmful medical treatment, such as chemotherapy,” they said, following a joint study with other experts published in the academic journal Molecular Human Reproduction.

The scientists said it could also allow immature eggs taken from patients’ ovarian tissue to be matured in the laboratory and stored for later fertilisation.

Evelyn Telfer, a professor in the university’s school of biological sciences, said being able to fully develop human eggs in the lab could widen the scope of available fertility treatments.

a�?We are now working on optimising the conditions that support egg development in this way and studying how healthy they are.

a�?We also hope to find out, subject to regulatory approval, whether they can be fertilised,” Telfer said. (dpa/NAN)

The Day After I Leave Office, I’ll Submit Myself For EFCC Probe, Says Fayose