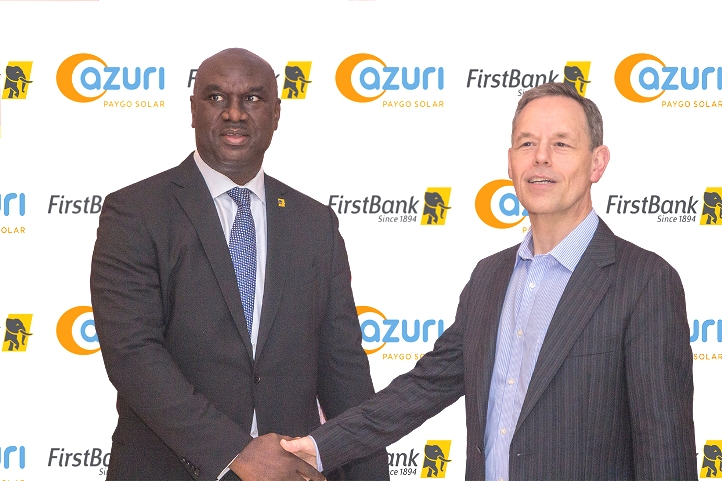 07 February 2019, Lagos, Nigeria – Azuri Technologies , a leader in pay-as-you-go solar technology in Africa, and First Bank of Nigeria Limited today announced a unique partnership that will help deepen financial inclusion in Nigeria while bringing affordable, reliable and clean power to millions of Nigerians.

Under the partnership, Azuri’s solar home TV product will be co-branded and co-marketed by FirstBank and Azuri. Pay-as-you-go customers will be able to pay for their solar via FirstBank’s Firstmonie agent network and mobile payment solution. Firstmonie agents are positioned within rural and semi-urban locations across the country and provide basic financial services such as account opening, cash deposit, cash withdrawals and bill payments.

More than 60 million of Nigeria’s roughly 200 million people do not have bank accounts and as little as 6% of people have a mobile money account. (World Bank 2018).

Speaking on the partnership, Azuri CEO Simon Bransfield-Garth and FirstBank CEO Adesola Adeduntan stated the partnership was a positive step in providing much needed energy and enabling access to financial services in rural, low-income areas.

“This partnership combines the reach of FirstBank with Azuri’s technology and pay-as-you-go solar expertise to bring next generation power to off-grid consumers in Nigeria” said Azuri CEO Simon Bransfield-Garth.

“Azuri and FirstBank share the vision of a level playing field where all consumers have the ability to benefit from modern financial and digital services, regardless of where they live and this agreement is another step in making that vision a reality.”

According to FirstBank CEO Adesola Adeduntan, “Financial inclusion is a priority with FirstBank and we are excited that with this partnership, our customers are able to access a wide range of services that address real problems such as access to power. With our over 16,000 Firstmonie Agents spread across the length and breadth of Nigeria, our customers are at an advantage in enjoying seamless financial services from the Bank that puts them first.”

From solar home lighting to solar satellite TV, Azuri systems are designed to deliver world class performance at an affordable price for all customers that experience irregular power supply. Customers make small weekly or monthly payments to unlock their system and power.

Pay-as-you-go solar is transforming lives by providing energy for lighting, phones and TVs while helping boost local economies with new employment opportunities and connecting off-grid households to financial and digital services that are helping improve productivity and increase income.

FG May Reconsider Importation Of Vehicles Through Land Border

1,001 thoughts on “FirstBank and Azuri partner to bring solar to millions and deepen financial inclusion in Nigeria”