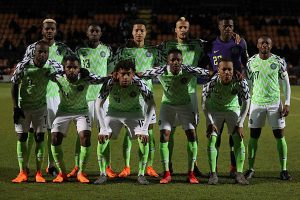 Following the Super Eagles’ two friendly games against Poland and Serbia ahead of the 2018 FIFA World Cup, completesportsnigeria.com’s JAMES AGBEREBI lists FIVE takeaways from the gamesa��a��.

FRANCIS UZOHO NOT THE ANSWER
The 19-year-old was in goal for both games against Poland and Serbia showed promise but cannot be relied upon at the World Cup.

Despite his huge frame he struggled at set-pieces, his decision making his poor, deliveries to outfield players is also poor.

After his outings in the two games, it is evident Uzoho though talented, is still bags of nerves and does not inspire confidence in his rear guards.

It would be a huge risk to make him number one at the World Cup where he will come up against the very best who would punish every slip ups.

As it is, Ikechukwu Ezenwa or Daniel Akpeyi would now have a chance to slug it out with Uzoho for the number one jersey following his average showings.

Due to his absence, there was no link from the midfield to the attack and also the defence had to endure waves of attacks from both Poland and Serbia.

The likes of Wilfred Ndidi, Ogenyi Onazi, John Ogu, Joel Obi had to put in a shift to cover up for Mikel’s absence which affected their own play.

SUPER EAGLES WAS OUTPLAYED BY BOTH POLAND AND SERBIA

In both games against Poland and Serbia, the Super Eagles were second best in terms of ball possession.

The Super Eagles did a lot of running, closing down, tracking back, markings but struggled to string two, three passes together.

Against Poland last week Friday, the Eagles were outplayed 56 per cent to 44 per cent in ball possession but still went on to snatch a 1-0 win.

But against Serbia on Tuesday night, they were deservedly beaten 2-0 after securing 44 per cent as against their opponent’s 56 per cent.

The games are a timely eye opener as the Eagles must improve ahead of their World Cup clashes, most especially against Croatia and Argentina, teams whose style is possession-based.

Another area that must be addressed by the Super Eagles’ coaching crew is the area of attacking and also defending set plays.

The Eagles never looked threatening whenever they had a corner-kick or were awarded a free-kick close to the 18-yard area of Poland and Serbia.

There was hardly a moment in both friendlies where the Super Eagles looked like scoring from these positions.

And at the other end, they were always all over the place when defending set plays which also exposed one of Uzoho’s weaknesses.

At the highest level like the World Cup, set plays are very key in deciding games especially when getting goals in open play becomes difficult.

In order to take advantage and also not be found wanting, the Super Eagles must find a way to address this.

THE SUPER EAGLES WILL BE A TOUGH NUT TO CRACK

Despite their short-comings in their two friendlies, the Super Eagles will be a tough team to beat when hostilities begin in Russia.

What they lacked in ball possession, smooth transition from defence to attack, they made up with relentless pressing and tireless running.

What this means is that the team is very hard working, committed and would not lie down to be rolled over in Russia.

The important thing for Gernot Rohr and his crew to do is work on the lapses noticed during the two friendlies and we will have a better team.