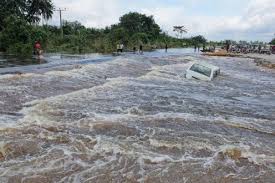 The ravaging flood in Delta State gave a big blow to the people of Ikpirima quarters in Osubi, Okpe local government area when a 15 year old JSS3 boy got drowned.

According to an eyewitness, the incident occurred Tuesday when the deceased simply identified as Onoriode came in company of three other children within the age brackets of 13 and 14 to fish in the pool of water beside the Osubi Airport gathered from the persistent dredging work, from Agbasa area of Warri in Warri South.

One of the relatives who was seen weeping uncontrollably narrated that no member of the family was aware that the children went fishing.

She also lamented that the news would be devastating to the family members especially their mother who is a petty trader.

A prominent members of the community who spoke on condition of anonymity disclosed that they have made frantic efforts in the past to stop those children from coming close to the pool of waters as the depth of the water is quite unimaginable.

According to him, “None of the children from this area dare go close to it”. “You can see that they are all from a distant community”, he concluded.

Also another member of the community disclosed that they always record death in that flood on yearly basis.

He called on the State Government to do something urgently to channel the water to the existing canals to avoid more lives being lost.

As at the time of filing this report, the body of the deceased was yet to be recovered as divers were still in search of the body at the scene of the incident.

APC On Atiku's US Visit: A Thief Is A Thief No Matter Where He Goes