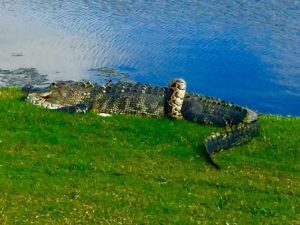 Several golfers in Naples on Friday had their games interrupted by an unusual, yet very Florida, sight: a python wrapped around an alligator with its head in the gatora��s mouth.

Richard Nadler was among several golfers to post photos and videos of the encounter at The Golf Club at Fiddlera��s Creek on social media.

a�?a�?Wilda�� day on the 10th hole today!a�? Nadler posted along with several photos of the pair next to a lake. a�?Thata��s a an alligator and a Burmese python entwined. The alligator seems to have the upper hand.a�?

Several witnesses said they saw the alligator eventually drag the snake into the water, WILX-TV reported. Security personnel from the club were on hand to make sure no one got too close to the animals.

PHOTOS: Rivers Women March Against Gender Imbalance In The Society