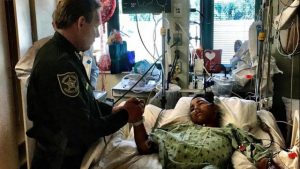 Among the heroes to emerge from the Florida school shooting horror is 15-year-old Anthony Borges, who local officials say was shot five times while helping save 20 of his fellow students.

Broward County Sheriff Scott Israel paid the teen a visit over the weekend as he continued to recover in a hospital.

a�?The Sheriff was honored to visit Anthony Borges,15, in the hospital. Anthony was shot five times. Fortunately, he is recovering, but has a long road ahead with more surgeries needed. Please join us in praying for the swift recovery of Anthony and all others from #StonemanDouglas,a�? the office wrote in a tweet along with a touching photo of the sheriffa��s visit.

Anthonya��s friend, Carlos Rodriguez, told ABC News that Anthony was the last student to scramble into a classroom and that the teen used his own body to block the door as he locked it to keep out accused killer Nikolas Cruz.

a�?None of us knew what to do. So he took the initiative to just save his other classmates,a�? Carlos told ABC.

Before Anthony got the door shut, he was shot five times and was the last of the shooting survivors to be in critical condition. He has since been upgraded to fair following surgery.

a�?He has a long road of recovery ahead of him but he is alive and stable,a�? reads a GoFundMe page created to support his family. a�?Our thoughts and prayers are with Anthony and his family. Any help is very much appreciated.a�?

Suspected shooter Cruz is charged with murdering 14 of Anthonya��s classmates as well as three members of the Stoneman Dougles staff.

Funerals for the victimsa��including Luke Hoyer, Alex Schacter, Jaime Guttenberg, and Scott Beigela��continued through the weekend.

9 thoughts on “Florida school shooting: Student who was shot 5 times while helping save 20 classmates gets visit from Sheriff”