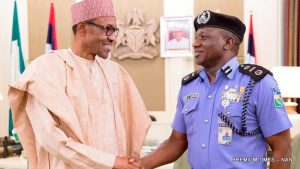 The Peoples Democratic Party has called on President Muhammadu Buhari to allow the Inspector-General  of Police, Mr Ibrahim Idris, retire on January 15, the IG’s 60th birthday.

The party said this was one of the ways the President could convince Nigerians and the international community about his commitment to have free, fair and acceptable elections this year.

The National Publicity Secretary of the PDP, Mr Kola Ologbondiyan,  who stated this while answering questions in Abuja on Wednesday,  said there was no need to extend the tenure of the IG.

He said the police force as an institution had many officers that were capable of leading the NPF.

There are insinuations that the Presidency is plotting to extend the tenure of Idris because of his alleged closeness to Buhari and the national leadership of the All Progressives Congress.

However, the PDP said that President Buhari must show evidence that he would match his words with action, just as he said in his New Year message that the  coming elections would not be a do-or-die affair.

Nevertheless,  Ologbondiyan said that if the APC and the President  were not planning anything negative, they should allow Idris to retire.

He said, “One of the ways to demonstrate or show that he (President Buhari) is committed to free, fair and credible elections, is not to extend the tenure of the IG,  who is due for retirement this month.

“He has said that he is committed to having transparent elections.  He needs to tell Nigerians by his actions, and not merely with words of mouth.”

In a related development, a member of the Police Service Commission, Najatu Muhammad,  has described tenure elongation in the force as what she described as “reinforcement of failure.”

Muhammad, who represents the Nigerian women in the commission, said there was no way she would keep silent as a key stakeholder in the police and national security establishment.

She said it was even wrong to start discussing the extension of the tenure of the IG and service chiefs who she alleged had failed.

In a statement made available to The PUNCH, she stated, “The idea of extending the tenure of the IG and the service chiefs who have woefully failed is a farcical travesty which abuses the patience and common sense of Nigerians.  We can expect that the  call of millions of people across party lines for their immediate retirement is not going to be unheeded by the President.”

Muhammad said that there were instances where policemen had absconded from  their duties due to poor welfare, adding that the alleged  evidence of abuse of power should not be ignored.

She said that protests by gallant men and women of the police force as seen in Borno, Owerri and Buni Yadi were unprecedented.

She stated, “Today, officers are abdicating from even training, rather than allowing themselves to be treated like cannon fodder; poorly armed, poorly paid , poorly trained and led to their early graves in droves while some of their junior ones are given rapid accelerated promotions to superior (and juicy) positions without training or recourse to due process.

“This is the prevailing environment within the Police Force today – the direct result of which is indiscipline and fallen morale amongst officers and the rank.

Meanwhile, there are strong indications that the police have begun redeployment of command commissioners ahead of the February and March elections.

Security sources told The PUNCH that the changes were part of the preparations of the police for the elections.

The Force spokesman, Jimoh Moshood, confirmed the redeployment to one of our correspondents.

He, however, explained that the action was routine, adding that it was taken because there were vacancies that must be filled.

In his reaction, however, the Spokesman for the Buhari Campaign Organisation, Mr. Festus Keyamo (SAN), said the PDP was raising a false alarm.

Keyamo argued that the President had the right to retain or extend the tenure of the IG as he deems fit.

He said former President Olusegun Obasanjo also extended the tenure of a police boss during his time. He wondered why the PDP did not complain when Obasanjo did it.

The senior advocate said, “The highest statutory rank you can get as a policeman is commissioner. Every other rank is a political appointment. So, it is at the discretion of the President to appoint or not. Let the PDP wait till they get to power in many years from now before they dictate to the President on who to appoint.

“Nobody dictated to Obasanjo when he extended the tenure of the IG. These things are done sometimes for the purpose of convenience in terms of planning and arrangement because the ultimate desire of all of us is to have a peaceful election.

“The PDP is jittery because they used to use the  police and INEC to rig elections until the game changed in 2015. Even the former IG, Suleiman Abba, said he was sacked because he refused to help them rig 2015 elections.”

Ekiti, Imo, Edo get new CPs
Consequently, the redeployment started on Wednesday with new commissioners assuming duties in Edo and Ekiti states. A new police commissioner has also been posted to Imo State.

A top police officer at the force headquarters, who confided in The PUNCH, said policemen were lobbying for posting to Lagos, Rivers and Ogun.

“Many cops are lobbying for posting to states such as Rivers, Imo, Ogun, Lagos and others which they believe are political hot zones where they could make money during the elections,” the top officer said.

But Moshood, in the interview with The PUNCH, denied the allegation that officers were lobbying for posting to some states.

He explained that some officers were redeployed to fill the vacancies created by those offering courses at the National Institute for Policy and Strategic Studies.

Vacancies are being filled –Force spokesman
When asked about policemen lobbying for posting to Lagos, Ogun, Imo and Rivers states  ahead of the elections, Moshood said, “No, people have been posted already, so the issue of lobbying does not occur. For example, last Saturday, CP Fatai Owoseni and others retired from the service and were pulled out of the force. There was a vacuum that we had to fill.

“Also, some went for courses at NIPSS as well as some special courses, so it’s those vacancies that were being filled. It is not true that there is massive redeployment of policemen.”

In the Imo State command, one of the areas affected by the changes, the Commissioner of Police, Dasuki Galadanchi, has been posted out of the state.

It was gathered that   Idris had also redeployed   three deputy commissioners of police in the command.

One of our correspondents gathered that the IG transferred the Imo CP to the Bauchi State Police Command.

According to the source, the Commissioner of Police in charge of Kogi State Command, Ali Janga, had been transferred to the state.

Janga was in Imo State in November on election duty during the All Progressives Congress’ primaries which ended in a controversy.

The PUNCH gathered that similar massive transfers would be carried out in almost all the security agencies in the state before the commencement of the general elections.

When contacted, the Police Public Relations Officer in the state, Orlando Ikeokwu, said the command was expecting the arrival of a new commissioner of police in the state.

In Ekiti State, the new Commissioner of Police, Mr Asuquo Amba, said on Wednesday that the command would strive to make the crime-free.

Amba said that he would strengthen community policing in the state to reduce crimes and all forms of criminality.

The new CP, who took over from Bello Ahmed, who had retired from the force, spoke at the command headquarters in Ado Ekiti while addressing men and officers of the command.

In Edo State, Hakeem Olusegun Odumosun has been posted to the state as the CP. He replaced Mr. Babatunde Kokumo who is proceeding to the Nigeria Institute of Policy and Strategic Studies, Kuru, Jos.

Odumosun, who resumed duty on Wednesday, said his mission in the state was to protect lives and property and ensure the state was safe for all.

Pdp House Caucus Denounces Impostors Claiming To Be A Faction