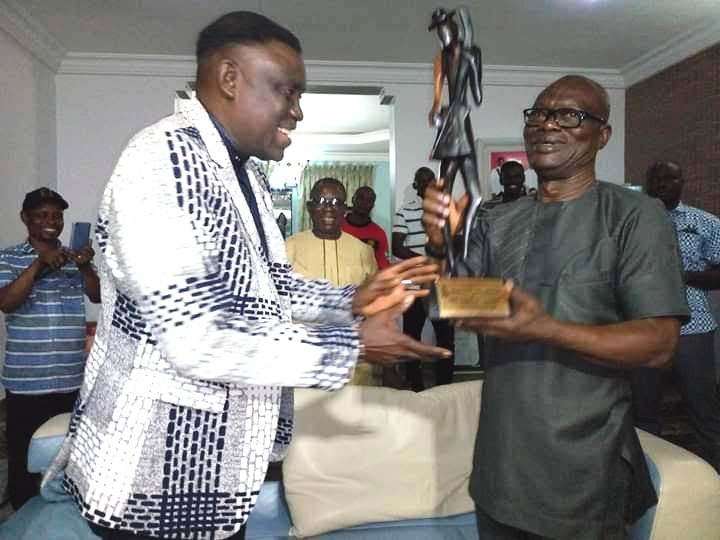 For his philanthropic gestures and his contribution to development of music, former Secretary to Delta State Government (SSG), Comrade Ovuozourie Macaulay, has bagged an award from the Performing Musicians Association of Nigeria (PMAN), Delta State chapter.

The award saw the cream of performing artistes in Delta State thronging the streets of Owhelogbo, Isoko north local government area, in march to Macaulay's hometown residence where the award was presented by PMAN, State Chairman, Mr Quincy Tebite aka “Tesiosio”.

Receiving the award titled, 'The Beloved Pride of Delta State PMAN', Comrade Ovuozourie Macaulay dedicated the award to equity and fairness stating that he is humbled by the award.

Macaulay however advocated the need for artistes to promote peace, unity, build bridges of peace and understanding across ethnic, political and religious divide.

He said, “Am humbled because you remembered my benevolence four years after. I urge you to use music to promote Delta State. Let's use music to build Bridges of understanding. Use your music to encourage revolution. May God remember you. I dedicate the award to anybody who believes in equity”.

Earlier in his address, PMAN State Chairman, Mr. Quincy Uruemuesiri Tebite commended Macaulay for his kind gestures towards the association, particularly the donation of a brand new 18 seater bus to them.

“Your antecedent in PMAN Delta State is most enormous. We have on record that in Nigeria, Delta State PMAN is the only chapter with an 18 seater bus, courtesy of Macaulay's benevolence. Our award night took place in Orchid Hotel, October 10, 2018. Because you could not make it, we decided to bring this award. We know that God has a bigger plan for you,” he added.