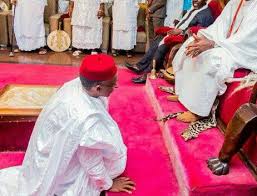 El-Rufai was down on his kneels at the All Progressives Congress, APC, mega rally in Lokoja, on Thursday, begging the people of the State to forgive Governor Yahaya Bello of whatever wrong he had done and vote him back to power.

El-Rufai, who is the Chairman of the All Progressives Congress Gubernatorial Campaign in Kogi State was quoted as saying, “Many people say Yahaya Bello is young and that he has fought many people. For every one that the governor has offended, I am asking all of you to forgive him. He is young, he is supposed to make mistakes.

“When you are young, you make mistakes, but you are supposed to learn from him. On his behalf, I am kneeling down to beg all of you to forgive Yahaya Bello if he has offended you.”

Reacting Dankwambo, on his Twitter page wrote, ”How do you beg for forgiveness for a governor owing 30 months salaries and who cannot point to one project in 4yrs?”

NOT TOO YOUNG TO RUN BILL CAMPAIGN HITS ILORIN