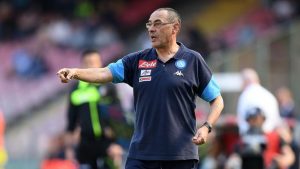 Chelsea appointed former Napoli boss Maurizio Sarri as their new manager on Saturday with the Italian signing a three-year deal and promising to bring “entertaining football” to Stamford Bridge.

Sarri will be followed to West London by Napoli’s Brazilian-born Italy international midfielder Jorginho, whose signing was also confirmed on Saturday by the Roman Abramovich-owned club.

Sarri led Napoli to two second-place and one third-place finishes in three seasons in charge. He was Serie A Coach of the Year in 2017.

“I am very happy to be coming to Chelsea and the Premier League. It is an exciting new period in my career,” he said in a Chelsea statement.

“I look forward to starting work and meeting the players on Monday ahead of travelling to Australia, where I will be able to get to know the squad and begin our match action.

“I hope we can provide some entertaining football for our fans, and that we will be competing for trophies at the end of the season which is what this club deserves.”

Sarri will be the sixth Italian to manage Chelsea after Gianluca Vialli, Claudio Ranieri, Carlo Ancelotti, Roberto di Matteo and Conte, who left with a year still on his contract.

“Maurizio’s Napoli side played some of the most exciting football in Europe, impressing with their attacking approach and dynamism, and his coaching methods significantly improved the players at his disposal,” she said.

“If he creates a team as entertaining to watch as Napoli were under his stewardship then Chelsea’s fans are in for a treat,” he said on Twitter.

Conte joined Chelsea in 2016 and led them to the league title in his debut season along with an FA Cup triumph last campaign.

He had already taken charge of pre-season preparations at the club’s Cobham training ground outside London but his relationship with Chelsea’s hierarchy was strained after disagreements over their transfer policy last season.

Under Conte, Chelsea failed to qualify for the coming season’s Champions League after finishing fifth in the Premier League. The team will now play in the Europa League.

Chelsea take on Huddersfield Town in their opening fixture of the new Premier league campaign on Aug. 11. (Reporting by Sudipto Ganguly in Mumbai; editing by Amlan Chakraborty and Clare Fallon)