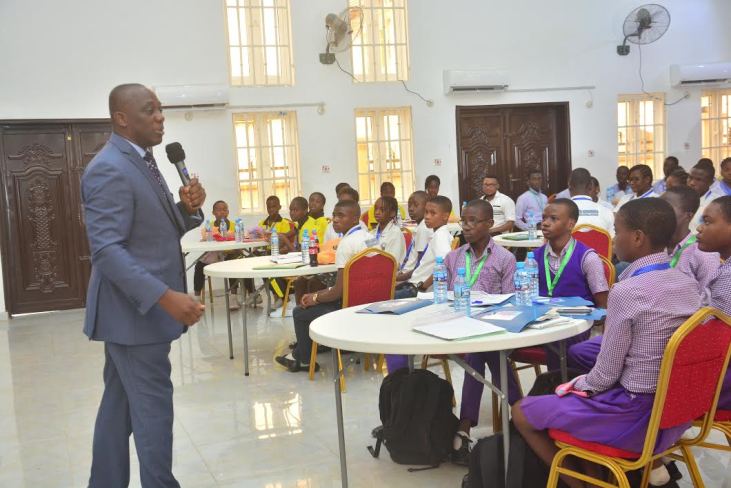 A 1-Day seminar on leadership development and positive practice has ended in Asaba, Delta State capital, with a charge on students to develop their skills, have a culture of cleanliness both at home and in school and articulate clear goals which would better positioned them to take leadership responsibilities.

The founder, Mercygate Leadership Foundation, Mr Peter Mrakpor, revealed that the foundation has not dealt with children of their age but younger adults and youths but “we tried to look at a situation where if you are organized in your personal life you will be able to accomplish more in life”, acknowledging that the family, church and Mosque have failed the society.

Mrakpor, who is the State Attorney-General and Commissioner for Justice, spoke on “Success habits: The need, goal and accomplishment”, charged the students that their background does not matter, “You background cannot determine your life. Your mind has the capacity beyond what you can imagine”.

He claimed 90 per cent of failures are borne out of laziness, calling on them to avoid mental laziness, stressing that the TV set, has become a societal challenge, “the quality of a movie, is the value you derive from it”.

The Attorney-General charged them to plan for their lives, “You must work out your days to see that you live a comfortable life”.

He identified gossip as another challenge bedeviling students, “if you spend all you time gossiping in school, you will not go far. If you have unprogressive friends, your future will be ruined “, disclosing that he signs off 80 -100 youths from going to the prison daily.

She revealed that the foundation also offers scholarships to indigent students and vocational studies as the foundation believes in the future of the country, “and you are the leaders of Nigeria”, she hinted.

Mr Prince Omene, who spoke on “Leadership: Role of leaders, morals, Values and Ethics of a good leader and keys to successful leadership”, motivated the students to discover themselves and have an understanding of their purposes in life.

He said: “A leader is a person who has discovered him/herself and understands his/her purpose. As a leader, you ought to lead by example. In your school, there are things you can suggest that could make the school grow. A sense of humbleness, dignity and awareness, let them be part of your value system. Whatever you do for good 21 days becomes part of you – practice it”, Omene charged the enthusiastic students.

Also, Pharm Benedicta Uweru, spoke on “Gender and leadership, leadership and followership” said the assumption that males were better suitable than females for leadership role was until recently.

She lamented the gender inequality in the country’s politics, “the fight against extreme poverty is tied to the fight for gender equality and empowerment, and nowhere is this more evident than in education”.

She charged female students not to allow inferiority complex to deny them of what they are created to be, “Whatever you need to be anything is on your inside”.

One of the students who participated in the seminar from Born Great High School, Osemene Marvelous, said he learnt working together as a team to achieve greater results.

Diezani, Oduah and 21 others in fresh Alleged FGa��s looters list