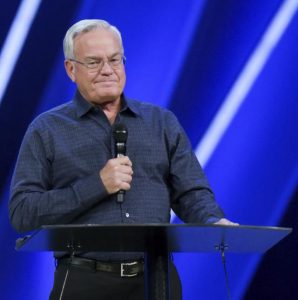 The founder of a Chicago-area evangelical church that grew to become one of the largest in the nation is stepping down, calling allegations that he touched and made lewd comments to female congregants a distraction.

The Rev. Bill Hybels, 66, announced his immediate retirement at a meeting Tuesday with members of the Willow Creek Community Church in South Barrington, Illinois. He has said since 2012 that he planned to retire this October.

The Chicago Tribune last month reported details of the misconduct allegations against Hybels stretching back to the 1990s. A church inquiry cleared Hybels. He has said he has been accused of things he a�?simply did not doa�? and that the allegations are a�?flat-out lies.a�?

Hybels told congregants Tuesday that the allegations have become a distraction from the churcha��s mission and work. He apologized for making choices that put him in situations that could be misconstrued, and for reacting in anger when the accusations were made public.

a�?I realize now that in certain settings and circumstances in the past, I communicated things that were perceived in ways I did not intend, at times making people feel uncomfortable,a�? he said.

One of his accusers told the Tribune she does not plan to sue. It was unclear if others were taking legal action.

He said the decision to step down now a�?was mine and mine alone after a lot of prayer.a�?

Heather Larson, executive pastor, will take over as the churcha��s chief executive.

The church that Hybels started in Palatine, Illinois, in 1975, now has eight Chicago-area locations. Leaders say it draws 25,000 people each week.

Police Dismiss Gov. Wike's Claim That IGP Ordered Him To Be Killed