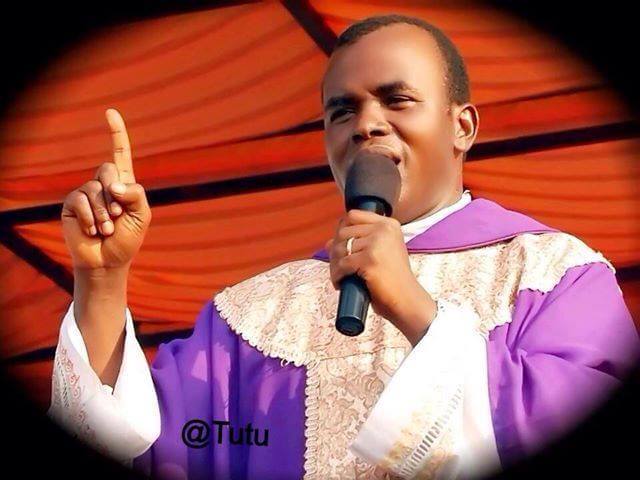 A spokesman of Reverend Father Ejike Mbaka has alleged that there was an assassination attempt on the controversial priest in Enugu on Thursday.

The spokesman, Maximus Ugwuoke blamed it all on politics, days after Mbaka publicly declared the Abubakar-Obi ticket doomed.

“It is with rude shock and utter surprise that we received the report of the attempted assassination plot of the Spiritual Director of Adoration Ministry Enugu Nigeria last Thursday evening by some unknown gun men who fired gun shots at him on his way in Enugu.

“This incident has added to several other assassination plots targeted at Fr. Mbaka since after the first plot that was carried out on him on his way from the Bishop’s house where he had gone to answer an impromptu call by his Bishop during the regime of Governor Chimaroke Nnamani of Enugu State.

“This assassination plot against Fr. Mbaka is coming barely few days after the 2018 Harvest and Bazaar of the Ministry where Fr. Mbaka had come under massive media attack for asking Peter Obi, the PDP Vice Presidential candidate for the 2019 general elections who attended the Bazaar programme, to make public his support or donation for the Church Project of the Ministry.

“Many supporters of Peter Obi and even clergies have misconstrued this as embarrassing to Peter Obi and to the Catholic Church and this has consequently given rise to the statement issued by the Catholic Bishops Conference of Nigeria (CBCN) that same Thursday on the issue.

“The issue had lingered inspite of the apology which Fr. Mbaka in his characteristic humility had tendered at the altar to Peter Obi and anyone who may have, in any way, form or shape been offended at the Bazaar event.

“We have refrained from making any official statement on the ongoing media attack against Fr Mbaka over the Baazar incident because he had held us back from joining issues with the Church clergies and hierarchies on the subject, but we cannot continue to keep silent especially now that the issue is taking the dimension of a plot to terminate his life.

“We recall that the last time Fr. Mbaka raised alarm over threat to exterminate him was in early 2015 when he faced a similar persecution by some church hierarchy and the PDP Government following his 31st December Prophecy of the imminent defeat of former President Goodluck Jonathan led PDP Government by President Mohammadu Buhari at the 2015 general elections.

“Today with the 2019 general elections around the corner, it appears that history is repeating itself.

“The contemporaneousness of the recent attack of Fr. Mbaka by gunmen with the Peter Obi and the CBCN saga leaves us to a safe conclusion that the attack on Fr. Mbaka may have either been politically engineered or ecumenically endorsed, and thus we will not hesitate to call on the security agencies in this country to beam their search lights and leave no stone unturned in getting to the root of this issue.

“Fr Mbaka’s life means so much to us and many poor and voiceless Nigerians for whom he lives and so we cannot be silent on the face of any threat to his life real or perceived”.

Meanwhile, Governor Dave Umahi of Ebonyi State, who was a beneficiary of Mbaka’s blessings last Sunday, has called for investigation of the allegation

Umahi, who spoke as Chairman of the South-East Governors Forum, in a statement, expressed shock over the alleged assassination attempt on Mbaka and called on security agencies to unravel the circumstances surrounding the alleged attack on the Catholic Priest.

The Ebonyi governor, in the statement signed by his Chief Press Secretary, Emmanuel Uzor described the alleged attack on the priest as highest provocation of man against God and called for full scale investigation to unravel those behind the attempted assassination.

He said the attempted assassination of the Catholic priest showed how low men had descended in their inordinate quest for power and to silence the truth, and thanked God for saving the life of Mbaka while calling on the Inspector General of Police to dispatch a crack team to investigate the alleged attack.

Send your girls to school, girls' education is important- Orangun of Oke-Ila