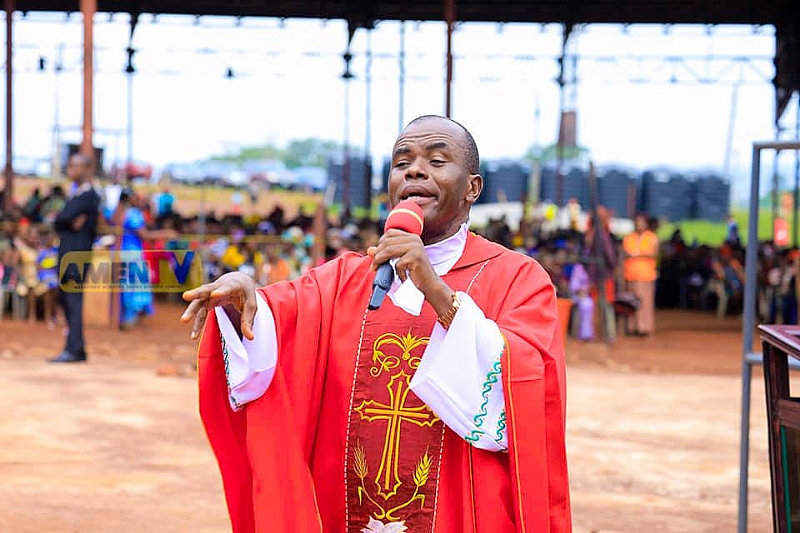 The Catholic Church may have issued a veiled threat to the Spiritual Director of the Adoration Ministry, Enugu, Rev. Fr. Ejike Mbaka, accusing him of overstepping the bounds of acceptable behaviours in Catholicism.

The thinly veiled threat was made by the Archbishop of Lagos, Adewale Martins, in an interview he granted the BBC Igbo.

Speaking against the backdrop of Mbaka’s prophecy about Senator Hope Uzodinma becoming Imo State governor via court order which came to pass, Martin said the controversial Reverend father may be handed a ban by the catholic church by way of being barred banned from preaching publicly.

He said Mbaka’s conduct in regards to his prophecy which borders on politics was unbecoming a catholic priest and it won’t be out of place if he is sanctioned by the Bishop of Enugu Diocese.

According to him: “It must be giving him (Bishop of Enugu Diocese) a bit of a headache and I feel sorry for him and I hope he will find some way of dealing with this matter that has been recurring. Of course, what could be done in the end is either to say, ok you receive the sanction of being stopped from public ministry. That is a possibility.”

TOTAL REJECTION OF BARBARIC ACTS DISPLAYED BY THE LEADERSHIP OF SSANIP AND NASU ON MONDAY AND TUESDAY 13TH & 14TH MARCH, 2017 IN THE CAMPUS OF FEDERAL POLYTECHNIC EDE.