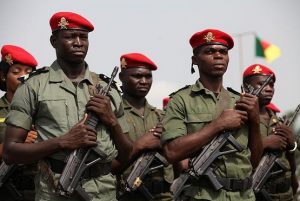 France condemned on Friday attacks by suspected English-speaking separatists in Cameroon that killed three gendarmes on Thursday, but urged the Cameroonian government to engage in dialogue to stop an escalation in violence.

The separatists have taken up arms over the past year in an attempt to create a nation they call Ambazonia. The insurgency represents the gravest challenge yet to the 35-year rule of Cameroon’s President Paul Biya.

France, which has significant business interests in its former colony and relies on it to fight against Islamist militants, has been careful not to overly criticise the government’s handling of the crisis.

a�?France condemns the new killings of law enforcement officials that took place on 1 February in Cameroon,a�? Foreign ministry spokeswoman Agnes Von der Muhll told reporters in a daily briefing after three gendarmes were killed in separate clashes on Thursday in towns in the North West Region.

She said only dialogue would enable a peaceful response to the concerns of all sides and ensure the unity and integrity of the country.

a�?This is a message we are also passing on to the Cameroonian authorities, in close consultation with our European and international partners,a�? the spokeswoman added.

Violence has flared in the past week, with armed separatist factions clashing against Cameroon security forces in several towns and villages in the two English-speaking regions after Nigeria deported the leader of the self-declared state and 46 others.

The United Nations refugee agency condemned the handing over of the 47 people, saying most of them had submitted asylum claims and their forced return was in violation of international refugee law.

More than 43,000 Cameroonians have fled as refugees to Nigeria to escape the government crackdown on the separatists, say local aid officials. The majority are in Nigeria’s Cross River state, which borders southwest Cameroon.